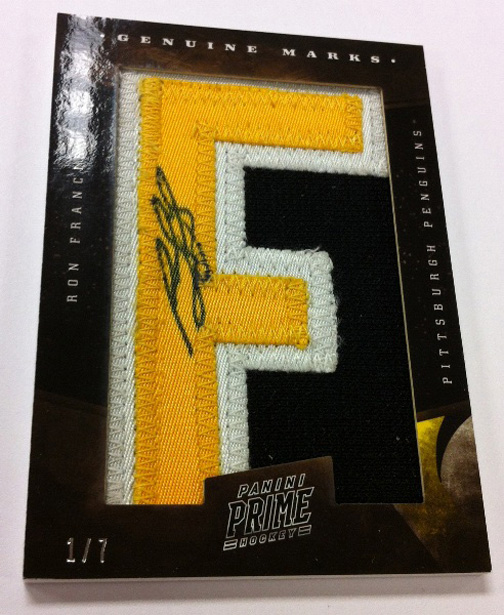 The pure, unadulterated beauty of the 2011-12 Prime Hockey previews we've brought you so far has been, by most accounts, simply breathtaking.

The pure, unadulterated beauty of the 2011-12 Prime Hockey previews we’ve brought you so far has been, by most accounts, simply breathtaking.

Let’ see, there was the two-part peek at some of the hand-selected swatches chosen for the Prime Colors insert . . . there was the pre-autograph Rookie Card gallery . . . there was the follow-up gallery after some of those gems had been signed . . . and there were the behind-the-scenes glimpses of Cam Talbot’s Prime-signing visit to Panini America HQ. But today, we have something completely new to show you.

In yet another stunning product development, 2011-12 Prime Hockey also will include the rare Genuine Marks insert that incorporates individual letters from the nameplates of game-worn jerseys and, in many cases, has the superstars who wore those jerseys autograph each letter.

The first such completed examples of these beauties — from the legendary Ron Francis, no less — arrived back at Panini America on Friday afternoon. So as soon as I carefully retrieved my jaw from the floor and affixed it safely back in its place, I took the following pics in hopes of injecting a little hockey card excitement into your Sunday afternoon.

Enjoy — and stay tuned to The Knight’s Lance for additional information and images as the release date for 2011-12 Prime Hockey draws near.