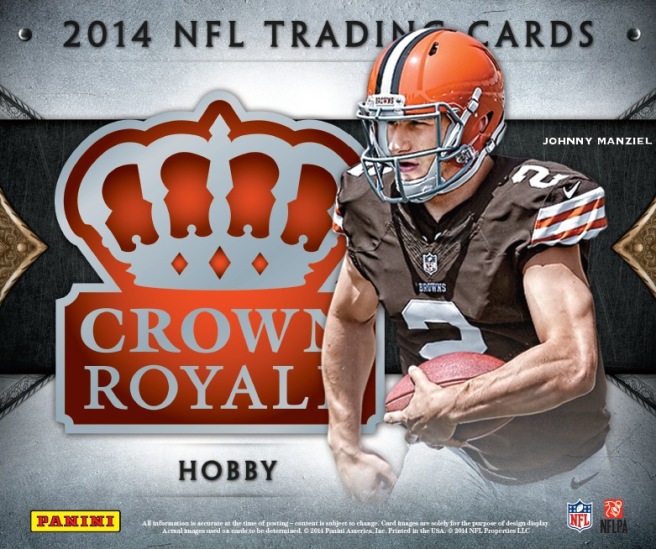 Panini America’s Crown Royale Football, one of the most uniquely designed and instantly recognizable brands in the trading card industry, returns for the 2014 season just one day before Thanksgiving, giving collectors across North America plenty of cornerstone cards for which to be thankful. Crown Royale’s calling cards — the resplendent, hard-signed Rookie Silhouettes — return for a new season with 40 new subjects representing the impressive 2014 NFL Draft class.

We provided a must-see preview of just some of the Rookie Silhouettes and Silhouettes right here on The Knight’s Lance three weeks ago. Today, we’re providing a more detailed look at 2014 Crown Royale Football as a whole.

Each hobby pack of 2014 Crown Royale Football will deliver one autograph or memorabilia card. The aforementioned Silhouettes will boast an array of variations this season, including Jumbo Silhouettes and Rookie Dual Silhouettes. Other highlights of the product include . . .

On the retail side, 2014 Crown Royale Football will deliver two autograph or memorabilia cards per four-pack box and offers retail-exclusive versions of Rookie Silhouettes, Rookie Signatures and base cards. We’ll have plenty more to preview on 2014 Crown Royale Football in the coming weeks right here on The Knight’s Lance. For now, though, check out the extended preview gallery below, including the first completed Rookie Silhouettes Autographs from Carolina Panthers star receiver Kelvin Benjamin.

All information is accurate at the time of posting — content is subject to change. Card images are solely for the purpose of design display. Actual images used on cards to be determined.