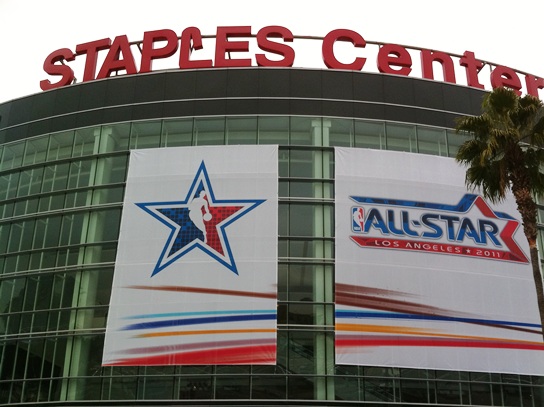 All the while, Panini America was busy putting on a week-long, show-stealing performance of its own . . . at the Los Angeles Convention Center for NBA Jam Session . . . at Grauman’s Chinese Theater for the casting of Bryant’s history-making hands and feet . . . at Bryant’s exclusive, celebrity-cluttered after party and at area Walmart stores for player appearances by NBA superstars Tony Parker, Ron Artest, Eric Bledsoe and Eric Gordon.

The whirlwind of activity — which ends Monday evening with the close of the NBA Jam Session — culminated a sleep-deprived and furious month during which Panini America also conducted extensive marketing activation at the NHL All-Star Game (Raleigh, N.C.) and Super Bowl XLV (Dallas).

The following images provide a telling glimpse inside Panini America’s star-studded five days in Los Angeles, a massive slice of hoops heaven that included, but certainly wasn’t limited to . . .

Stay tuned to The Knight’s Lance throughout the week for more exclusive coverage from 2011 NBA All-Star Weekend, including video interviews and, just perhaps, a few giveaways.

Leave a Reply to Will Liu Cancel reply