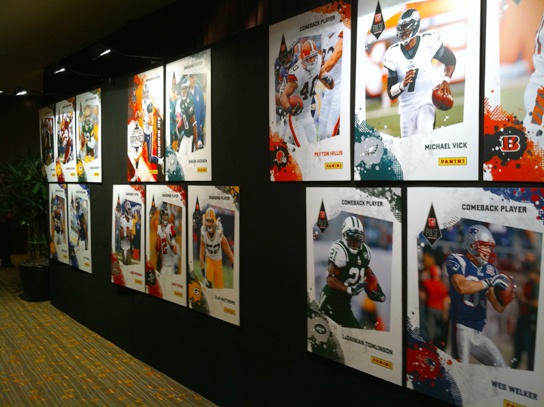 More than six inches of overnight snow has turned this already-frozen Friday in North Texas into something of a freaky Friday, just three days removed from the showcase that is Super Bowl XLV. For those of us at Panini America, things are just starting to heat up.

DALLAS — More than six inches of overnight snow has turned this already-frozen Friday in North Texas into something of a freaky Friday, just three days removed from the showcase that is Super Bowl XLV. For those of us at Panini America, things are just starting to heat up.

Indeed, with enough events and enough activation to keep us on the roads all weekend long, the countdown to kickoff is underway. . .

We’ve been on the go this week since Wednesday, operating two booths at the massive NFL Experience (one that anchors the Memorabilia Show and one at the Kids Zone). On Thursday, we spent the day working “Radio Row” inside the Super Bowl XLV Media Center with Panini America special guest Ryan Mallett, the star Arkansas Razorbacks quarterback who’s preparing for the 2011 NFL Draft. After a brief stint in Dallas, highlighted by Mallett’s appearance on a Tennessee radio station with fellow SEC great Archie Manning, we ventured west to Fort Worth so Mallett could make the rounds at the ESPN compound.

By the time we made it back to Dallas on the challenging icy roads Thursday evening, it was time to get dressed up (and, yes, even walk the red carpet) for the NFL PLAYERS Pulse Awards event, honoring some of the league’s most inspirational stars. The formal affair was co-hosted by actor/comedian Jay Mohr and CBS Sports’ James Brown, and provided a fitting, start-studded conclusion to a crazy Thursday.

In addition to creating special card sets that served as table centerpieces, Panini America was well represented at the Pulse Awards with a series of massive card blow-ups that greeted attendees as they walked into the Hyatt Regency Dallas’ Landmark ballroom.

Of course, while ALL of that was going on, we had another team of folks stationed inside the Dallas Convention Center to man our NFL Experience booths, surrounded by some of the most enticing football memorabilia and exhaustive interactive exhibits you’ll ever see.

Speaking of “exhaustive,” check out the following 40-image gallery chronicling Thursday’s excitement. We can’t wait to see what the rest of the weekend has in store.