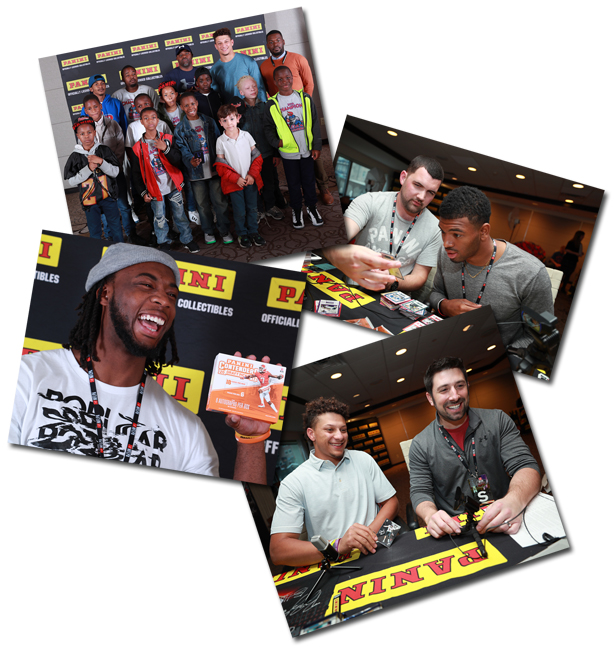 PHILADELPHIA — With the next chapter of their football careers about to begin, a new crop of NFL rookies began 2017 NFL Draft Week festivities with Panini America on Tuesday as part of the annual NFLPA Rookie Debut.

PHILADELPHIA — With the next chapter of their football careers about to begin, a new crop of NFL rookies began 2017 NFL Draft Week festivities with Panini America on Tuesday as part of the annual NFLPA Rookie Debut.

Nearly 20 players, including projected first-round picks Patrick Mahomes and Mike Williams (along with four of Williams’ National Championship-winning Clemson teammates), spent the afternoon signing autographs and posing for photos slated to be featured in upcoming Panini America releases. There was also plenty of time for fun as the gridiron standouts marveled at seeing themselves on cardboard for the first time while busting packs of the newest Panini America products (including the new 2017 Score Football) with some of the biggest names in group breaking.

Williams got to bask in the glory of 2017 Contenders Draft Picks Football (a product for which he graces the box) and to a man, the likes of Josh Malone, Ben Boulware, Cameron Sutton and more engaged the breakers in attendance (Bryan Gavin from Ultimate Box Breaks and Michael Hodges from STL Sports Cards) and those watching at home with great stories and plenty of enthusiasm.

On Wednesday, Panini America partnered with Mahomes for a special visit to speak to some Philadelphia-area Pop Warner athletes. Luckily for us, Panini America photographer Jeff Haynes was on hand for both events and captured the following images. Haynes also will be in attendance during tonight’s first of the 2017 NFL Draft.

Speaking of tonight, through a special partnership, Panini America will be embedded with Mahomes and his family and friends at the former Texas Tech star’s Draft Party in his home state of Texas. In addition to exclusive, behind-the-scenes coverage from the event, we’ll also be conducting an interview with Mahomes on Facebook Live.

In fact, Panini America will be all over the NFL Draft tonight, including creating real-time Rookie Cards that will be available beginning at 2 p.m. CST today on Panini Instant. When the draft begins, each card will be updated in real time as players are selected.

One Reply to “Panini America On Location at the 2017 NFL Draft: The NFLPA Rookie Debut (Gallery)”