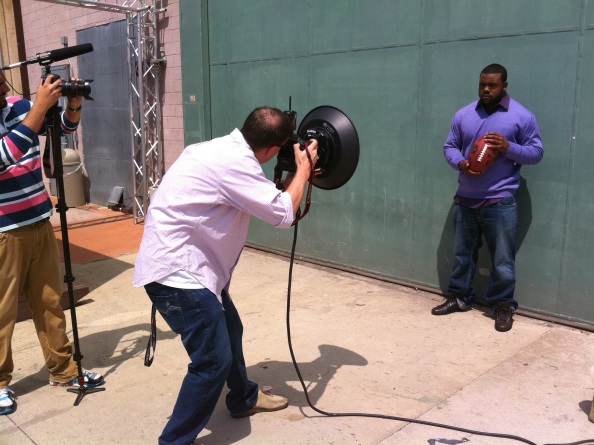 LOS ANGELES -- Just when we thought we couldn't pack more Panini America goodness into our hectic 2011 NFL PLAYERS Rookie Premiere week, along comes Friday to throw that notion on its keester.

LOS ANGELES — Just when we thought we couldn’t pack more Panini America goodness into our hectic 2011 NFL PLAYERS Rookie Premiere week, along comes Friday to throw that notion on its rear.

A day that started with Mark Ingram, Cam Newton and a quick drive to the NFL Network studios in nearby Culver City for a few special announcements (more on that later) gave way to a whirlwind two hours at the West L.A. Bust Buy store that included 10 rookies, free autographs and more fun.

And to think, we still have the NFL PLAYERS Rookie Premiere League celebrity flag football game to come this evening.

But no matter what happens tonight, it’ll be hard to top Panini America’s morning. After all, there’s probably not a better venue than NFL Network’s Total Access show with host Fran Charles for Ingram and Newton to announce their ink’s-still-wet Panini America autographed trading card deals.

The two rookie superstars then made the NFL Network rounds taking pictures, taping additional segments and generally soaking up the NFL-meets-Hollywood ambiance. After a quick trip back to the host hotel, it was on to Best Buy with the likes of Blaine Gabbert, A.J. Green, Jake Locker, Von Miller and DeMarco Murray, among others, for free autographs, fan interaction and live ESPN interviews.

As you’ll see in the gallery below, it was a priceless, postcard kind of day from Southern California.

Be sure to stay tuned to The Knight’s Lance for exclusive coverage of the Newton and Ingram announcements, including videos and images of them signing their first autographs for Panini America.