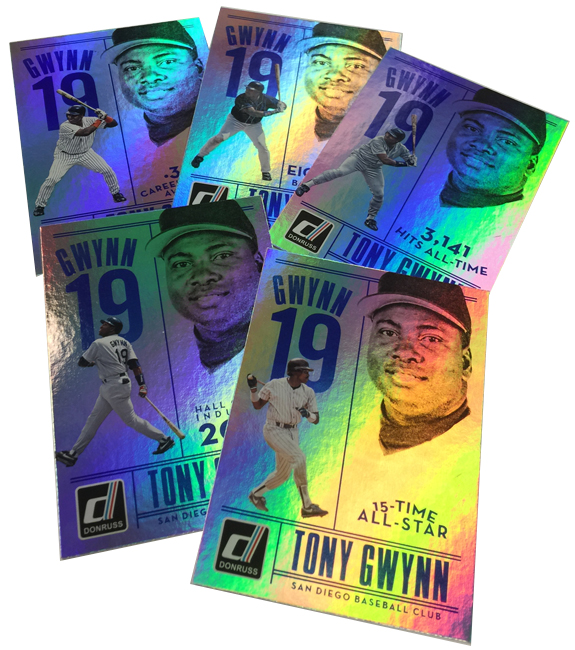 Next week, in 2015 Donruss Baseball, Panini America will honor one of the greatest hitters to ever walk into a batter’s box with a five-card Tony Gwynn tribute. Among the milestones being honored with the heroic, holofoil retrospective are Gwynn's eight batting titles (only Ty Cobb has more) and his 2007 induction to the National Baseball Hall of Fame. For good measure, the legendary San Diego Padres slugger also is featured on 2015 Donruss Baseball packaging.

Next week, in 2015 Donruss Baseball, Panini America will honor one of the greatest hitters to ever walk into a batter’s box with a five-card Tony Gwynn tribute. Among the milestones being honored with the heroic, holofoil retrospective are Gwynn’s eight batting titles (only Ty Cobb has more) and his 2007 induction to the National Baseball Hall of Fame. For good measure, the legendary San Diego Padres slugger also is featured on 2015 Donruss Baseball packaging.

Since joining my college newspaper nearly two decades ago, I have interviewed a cast of thousands, mostly athletes and coaches; although there was a stretch of news reporting in there that included coverage of politicians, lawyers and a woman who lived with like 87 cats in a one-bedroom house. I’ve been fortunate to talk with senators, governors and even a couple of presidents. Still, the majority of my favorites are from the sports world, including Roger Staubach, Jerry Jones, Ray Allen, Dom DiMaggio, Michael Irvin, Howie Long, Bill Self, Red Auerbach and Jason Witten.

As for my favorite all-time interview, that answer hasn’t changed since June 5, 1998, when I spent about 45 minutes with Gwynn. When he passed away last June, at just 54, my thoughts went to that afternoon in Arlington, Texas.

I was just 22 years old, barely a year out of school, and working for the Fort Worth Star-Telegram when Gwynn and the Padres visited the Texas Rangers for the first time. Interleague play was in just its second season. I would be writing two stories that day, a pregame mini-feature on Gwynn and a postgame piece based on the game itself.

This wasn’t my first time covering the Rangers that season, but I wasn’t the regular beat writer, either, covering mostly high schools. For the most part, sports writers are a jaded bunch. They just are. They root for good stories and quick games, could care less about who wins and loses. Maybe in time I became a little jaded, too. Or maybe more disappointed than jaded.

At this time and place, though, I was still in awe of professional athletes, still thought of them as my childhood heroes and the guys on my baseball cards. Earlier that season, I attempted to ask Roger Clemens a question and to this day, I have no idea what came out. He politely asked me to repeat it, and I just stared at him for 10 seconds before walking away.

That experience was in the back of my mind as I turned the corner of the dugout runway and saw Gwynn, then 38, sitting by himself on the bench watching batting practice. Our interview wasn’t scheduled or anything, I was just hoping to grab a few quotes.

I walked over and said, “Excuse me, Mr. Gwynn, do you have a few minutes?”

Yes, I called him Mr. Gwynn. I don’t know why; it wasn’t planned, it just came out. He turned and smiled before standing up and putting his hand out. “Of course, I came out early figuring someone might want to talk,” he said. “Call me Tony.”

We started slow. I guess I was tossing a few softballs his way about interleague play in general, his role as a team leader, and since the Padres were in first place, we talked about this possibly being the best San Diego team of his career. After about 10 minutes, when honestly I was thinking of calling it an interview and heading for the press box Of course, we ended up setting there for another 30 minutes.

I asked about the lockout in 1994 costing him a chance at batting .400; he was hitting .394 when the lockout took place in August. He said there was no doubt in his mind that he would’ve realized .400; he was seeing the ball as well as he ever had. But that there was no bitterness, that’s just how it goes.

We then talked about Ted Williams. Gwynn had credited Williams for helping him hit more home runs — a career-high 17 in 1997 and 16 more that season. Gwynn talked about his hotel phone ringing at 4 in the morning in random cities and picking it up to hear “Teddy Ballgame” yelling at him about his hip rotation in the game the night before. The conversations and genuine friendship shared by the two is pretty cool stuff in and of itself, but then there’s this: The owners of the two highest career batting averages for players starting their careers since 1930 are Williams (.344) and Gwynn (.338). 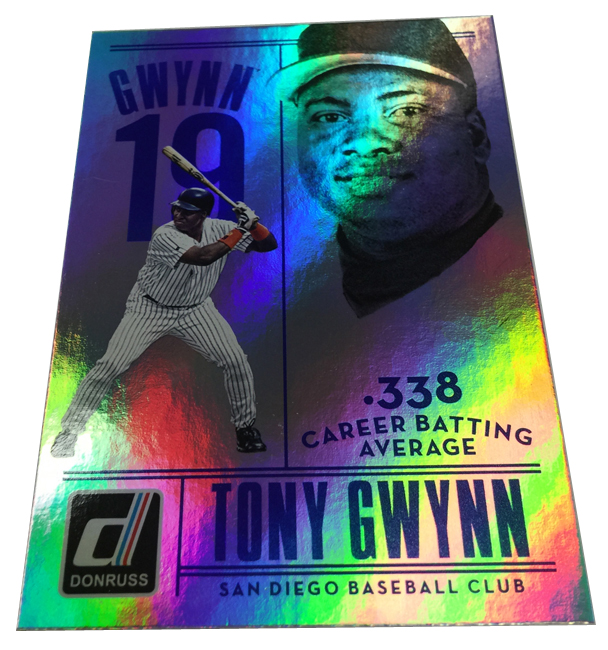 After talking about Williams for 10 minutes, there was a natural pause, and at this, I was about to offer my sincerest appreciation for the time when Gwynn said “You know what my greatest regret is going to be baseball wise?”

He didn’t wait for an answer.

“I would’ve liked playing a game at Fenway Park.”

“Well,” I said, “it’s just one more season and you’ll play in the All-Star Game there. He just stared at me. “Really? No way, are you sure?”

He was literally giddy. After 17 years in the big leagues, Gwynn was by no means jaded. He said, not really to me, more to himself, “I bet Teddy will be there.”

Of course, Williams was there, and Gwynn helped him throw out the first pitch in one of the more emotional moments in baseball history. I was there at Fenway and can promise like the overwhelming majority, my eyes were more than damp.

As we finished our chat and shook hands, I mentioned having been nervous beforehand and he said, “Nah, that was great, that was fun. Just let me know if you ever need anything else.”

After the game, my assignment was talking with pitcher Kevin Brown, then with the Padres, formerly of the Rangers. He had a rough outing as the starter that day. My interview with him was much quicker, consisting of two words, which we can’t share on a family blog.

I’m honestly not sure Gwynn ever had a bad day playing baseball. There was so much joy. When he left this world last year, I read every story, obit and appreciation piece out there, and everyone carried that same message of class.

You can check out all five cards (front and back) of the upcoming Tony Gwynn Tribute in 2015 Donruss Baseball in the gallery that follows.

Jeff Sullivan is the Editorial Director for Panini America and can be found on Twitter here.