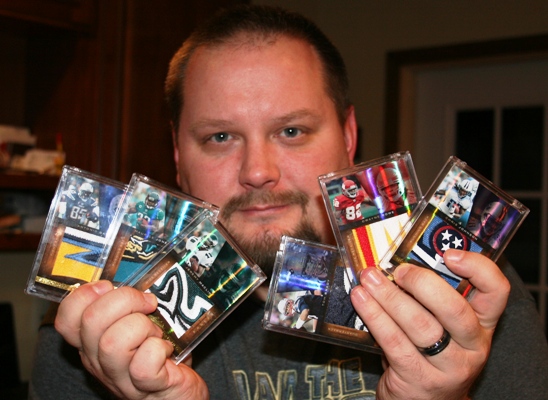 I was hanging out on the Panini America Facebook page late last week as part of my daily social media tour when I stumbled across one particular post that stopped me in mid-click. It was a gorgeous group of images showcasing every card in the 2010 Absolute Memorabilia Football Absolute Patches insert set.

I was hanging out on the Panini America Facebook page late last week as part of my daily social media tour when I stumbled across one particular post that stopped me in mid-click. It was a gorgeous group of images showcasing every card in the 2010 Absolute Memorabilia Football Absolute Patches insert set.

And it was beautiful.

To be blunt, the captivating multitude of multi-colored brilliance made for one awe-inspiring assemblage that most passionate collectors would prefer to anything gracing the pages of, say, Maxim Magazine or the Victoria’s Secret catalog. For that reason alone, the collection warranted a deeper inspection.

Turns out it’s the hard-earned handiwork of Bob Wilkie, who managed to complete the 40-card insert (with plenty of dupes as he continually upgrades the caliber of the set’s swatches) and now is going back to build the beauties from years past.

What follows is the short version of Wilkie’s Absolute Patches pursuit, in his own words. What follows that is one of the sweetest galleries we’ve ever delivered.

“I decided to put the 2010 Absolute Memorabilia Football Absolute Patches set together because of my insane love for jumbo-sized patch cards. I completed the 2009 set last year, and I am trying to back fill all of the previous years.  Putting together a complete set of cards makes for a great challenge, and this year’s set — with 40 cards in it — was quite the task!

“I love the Absolute Patches set because of the sizes of the patches — all nice and big!  This year had an added bonus of Panini America using many prime logo patches for the set. This made it incredibly fun (but also incredibly expensive) to put together, as I was always trying to find the most prime patch I could get. It took probably three months of scanning eBay and Beckett, using friends on YouTube and combing the various sports card forums to compile the complete the set; but I’m always on the lookout to upgrade multi-colored patches with logo patches whenever I can.

“If anyone reading this has one, please contact me ([email protected]).

“My favorite cards in the set naturally are all of the logo patch cards. From a player perspective, I PC Dwayne Bowe and Calvin Johnson, so I love those, too; and I also love the MJD patches, as they seemed to be either nameplate patches or logos (I have several of him). Eventually I’d love to have all of the cards in the set either come from nameplates or logos if possible.

“2010 Absolute Memorabilia Football has been the standout product of the year so far, and the Absolute Patches set, for me, is the cream of the crop.  I love autographed cards too, but I always lean toward collecting patches.”