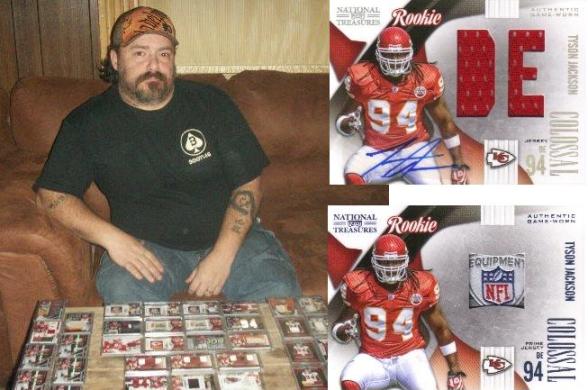 Here's one way to know for certain that 38-year-old Paul Pickett is passionate about his collecting pursuit: He collects the Kansas City Chiefs' Tyson Jackson -- despite living in the heart of Philadelphia Eagles country.

Here’s one way to know for certain that 38-year-old Paul Pickett is passionate about his collecting pursuit: He collects the Kansas City Chiefs‘ Tyson Jackson — despite living in the heart of Philadelphia Eagles country.

Pickett, a diehard Eagles fan who lives in Bethlehem, Pa., first started collecting Jackson in early 2010. In the 10 months since, he’s accumulated more than 200 different Jackson cards, many of them hailing from 2009 Playoff National Treasures Football.

If you or a collector you know is as crazy passionate as Pickett about a Panini America set or insert, please let us know via email at [email protected]. Until then, enjoy this tale of how Pickett became chief among all Tyson Jackson collectors.

I started collecting Tyson Jackson in February or March of 2010. I was working on an autograph set and didn’t have a player collection. I’m an Eagles fan and wanted to collect someone who was still relatively new. But LeSean McCoy and Jeremy Maclin cards were kind of pricey and I was just getting back into the hobby.

I picked up a couple of packs of football cards and told myself that if I pulled a decent, low-numbered card of someone, I would start collecting that player. I pulled a Jackson autograph numbered to 25 and have been collecting him ever since.

I bought my first National Treasures card from another a FreedomCardBoard.com member in June. It was a Laundry Tag numbered to 50. I won my first National Treasures card on eBay in August, another Laundry Tag numbered to 50, and I was thinking about going for the complete run of those. Instead, I started working on the player set (one of each card in the set minus the 1/1s – unless I could find them. As I gained more cards, duplicates of cards I already had started popping up so I started buying those, too. So then I decided to get as many of his National Treasures cards as I could find. It’s now January and I haven’t finished the player set; I still need three and can’t find them anywhere.

I have a total of 48 National Treasures cards, my favorites being the Laundry Tag numbered to 50 with the NFL shield (thanks to my Secret Santa, Chris) and the Reebok Logos numbered to 15.

The pickings have been getting slim but that hasn’t made me want to do it any less. Whenever I have the chance to add another, I’m like a kid in a candy store. I tend to wait until the last minute to bid on eBay, unless it’s a National Treasures card. Then I’m the first to bid as soon as I see it so the seller has less reason to drop the auction. I don’t worry about the prices, though. I can usually move something else I’ve accumulated if a National Treasures card comes up.

If he does do well and his card prices go up, I won’t look to get rid of any of his cards. Then all the buying I’ve done up to now will have been pointless. You have to set a goal and stick to it. I’ve reached the point of no return – 10 percent of the master National Treasures set, 20 percent of all of his cards.

Here’s an interesting note: Of the last 36 auctions that have ended on eBay for Tyson Jackson National Treasures cards, I’ve won 35 of them. The other is a Buy It Now listing that is more than three times what I normally pay for that card, one of the Rookie Patch Autographs numbered to 99. The seller won’t come down and I can’t get myself to pay that much. I told him I’d get back to him when I get the other 98.

My favorite part of collecting is the hunt, not the big pull. If I can find a card I need, either for the hoard or to complete a player set, it means more to me than getting that big hit that I really don’t need. I’m a haggler at heart. So if I’m able to get a seller to a more reasonable price for a card, I’ll take that over a rare card that I don’t need.