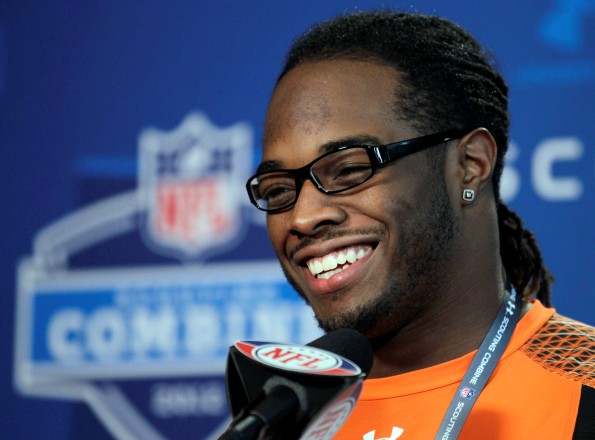 Panini America and Peach State Sports are teaming up to bring former University of Alabama running back and future NFL superstar Trent Richardson to the 2012 Industry Summit for a special Sunday night signing for Summit attendees.

Panini America and Peach State Sports are teaming up to bring former University of Alabama running back and future NFL superstar Trent Richardson to the 2012 Industry Summit for a special Sunday night signing for Summit attendees.
Richardson will sign one free autograph for each registered Summit attendee. A photo will be provided for the signing, however registered attendees that participate in the signing session will be invited to bring their own item (limit one item per registered attendee). Panini Authentic, the authentic memorabilia division for Panini America, will provide complimentary authentication and COAs for every signed item.

The Richardson appearance delivers the excitement and anticipation that collectors and the entire trading card category have for what is expected to be one of the best rookie classes for the NFL, NHL and NBA during the 2012-13 season.
In the NFL, Richardson will join the likes of Andrew Luck, Robert Griffin III and Justin Blackmon in leading the charge when the NFL Draft takes place in April. During his decorated college career, Richardson rushed for more than 3,100 yards and 35 touchdowns while helping the Crimson Tide win two national titles.
On the heels of an exciting rookie class in the NHL that features Ryan Nugent-Hopkins, Gabriel Landeskog and Adam Henrique, the upcoming NHL Rookie Draft is expected to rival the Ovechkin/Malkin Draft and feature Russian prospects Nail Yakupov and Mikhail Grigorenko.
For Panini America, the 2012-13 NBA season will feature a double rookie class including the likes of Kyrie Irving, Derrick Williams, Jimmer Fredette, Anthony Davis and Harrison Barnes.
Panini America has big plans for the next class of rookies across all sports, and company officials will elaborate on them – including details on a few surprises – at the 2012 Industry Summit.
“Trent Richardson will be one of the top rookie collectible targets for our customers coming out of the 2012 NFL Draft. We’re excited to partner with Peach State to bring one of the top NFL rookies to the Industry Summit,” said Jason Howarth, Vice President of Marketing for Panini America. “Trent, along with other incoming rookies, will bring a lot of excitement to NFL trading cards this upcoming season.”
“This appearance is a great opportunity for everyone attending the 2012 Industry Summit to meet, shake hands with and get a free autograph from one of the greatest college football players of the last few seasons,” said Peach State Sports President Jim Grant. “This is a meaningful partnership for us, not just with Trent, but to work with Panini America to deliver this experience.”
Panini America will provide exclusive coverage of Richardson’s appearance on the company’s official blog, The Knight’s Lance.
Panini America is the only company in the world that manufactures licensed trading cards and stickers for the NBA, NFL, NFL PLAYERS, NHL, NHLPA, MLBPA and FIFA World Cup. The company also owns exclusive entertainment licenses with Disney, Justin Bieber and Michael Jackson, and more than 600 global licenses with other sports and entertainment properties.