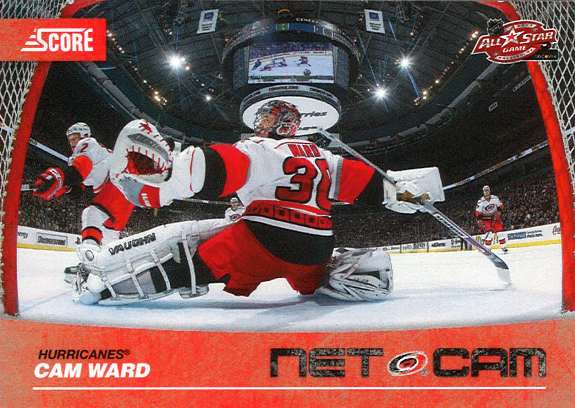 Beginning Friday at the Raleigh Convention Center in Raleigh, N.C., Panini America will aim to dazzle a decided hockey contingent with a multi-faceted, fan-friendly approach to the 2011 NHL All-Star Fan Fair.

Beginning Friday at the Raleigh Convention Center in Raleigh, N.C., Panini America will aim to dazzle a decided hockey contingent with a multi-faceted, fan-friendly approach to the 2011 NHL All-Star Fan Fair.

The show, held in conjunction with Sunday’s NHL All-Star Game, will be the company’s first as a member of the NHL family. Rest assured, we’re putting our best foot forward.

Over the next few days, we’ll be releasing the details of our show plans on The Knight’s Lance. Today, we shed some light on what has become a calling card of any Panini America show appearance: A show-stopping wrapper-redemption program.

The show-exclusive 2011 NHL All-Star Game set will feature seven cards highlighting the 20th anniversary of the landmark 1990-91 Score Hockey release. The set, previewed in all of its glory below, will be limited to 500 copies and will be augmented by special insert cards, including one honoring the Carolina Hurricanes‘ Stanley Cup win.

Stay tuned tomorrow for a comprehensive gallery of the redemption set’s stunning autograph and memorabilia cards. For now, enjoy this first look at some of the sweet base cards and inserts from the set.

13 Replies to “Panini America Prepares for the 2011 NHL All-Star Game: The Gradual Reveal”