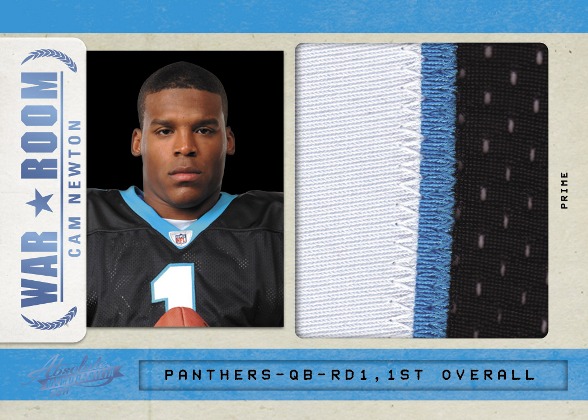 During the first 10 years of its existence as a stand-alone product, Absolute Memorabilia built considerable brand equity by consistently delivering some of the most popular Rookie Cards in football every year.

During the first 10 years of its existence as a stand-alone product, Absolute Memorabilia built considerable brand equity by consistently delivering some of the most popular Rookie Cards in football every year.

But when the venerable brand enters its second decade with the September release of 2011 Absolute Memorabilia Football, Panini America product developers are looking to accentuate an already-sterling reputation by delivering, for the first time, on-card autographs for Absolute’s trademark Rookie Premiere Materials RCs.

“One of the biggest hot buttons for all collectors is on-card autographs and how we can deliver more of them,” says Ben Ecklar, Panini America’s Director of Product Development. “We absolutely understand and appreciate the importance of that aspect of our products to consumers. That’s why the 36 NFL PLAYERS Rookie Premiere guys will have on-card autographs in Absolute for the first time.

“That’s a huge step forward for the Absolute brand and should make what traditionally are among the strongest Rookie Cards on the market even stronger in 2011. Needless to say, we’re pretty excited about that development.”

That development should be well received by collectors who’ve come to expect big things from Absolute. Once again this year, the product will deliver one autograph (numbered to 299 or less) or one memorabilia card (numbered to 100 or less) per pack and each four-pack box will yield two autographs, two memorabilia cards, two Rookies and two additional parallels or inserts.

Also returning for 2011 are the mesmerizing Absolute Jumbo Patches memorabilia cards and a whole host of additional gear-graced goodies including:

“It’s no secret that last year’s Absolute Jumbo Patch insert was one of the most stunningly good-looking game-worn memorabilia sets of all time,” Ecklar says. “Well, it returns in all its glory in 2011, but with added levels of collectability and cool with the Jumbo NFL Shield version. Absolute Memorabilia is one of the most popular football sets on the market every year. This year’s version will only serve to strengthen that reputation.”

Enjoy this exclusive first look at the product and stay tuned to The Knight’s Lance for the latest updates on 2011 Absolute Memorabilia Football.