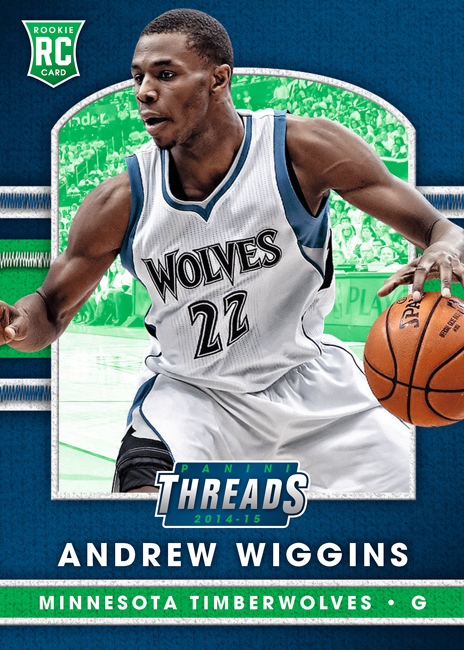 Early next month, Panini America will put the finishing touches on 2014-15 Threads Basketball and begin shipping the company's second Target-exclusive NBA trading card product of the season, marking the popular brand's first appearance on the market since the 2012-13 season.

Early next month, Panini America will put the finishing touches on 2014-15 Threads Basketball and begin shipping the company’s second Target-exclusive NBA trading card product of the season, marking the popular brand’s first appearance on the market since the 2012-13 season.

Much like 2014-15 Prestige Basketball, the first of three planned 2014-15 Target-exclusive NBA products that dropped in October, 2014-15 Threads Basketball will arrive in stores sporting three unique SKUs (Premium boxes carry a $120 SRP, Blaster boxes carry a $30 SRP and Gravity packs carry a $4 SRP). We’ll explore all three configurations in more detail after the jump — and provide a few sneak-peek images, too.

But before we get to the nuts and bolts of 2014-15 Threads Basketball, it’s probably worth showing you this little piece of NBA trading card history we Tweeted out earlier today:

We’ll have more on the sublime Voices of the Game insert below. But for now, we’ll explore some of the highlights of 2014-15 Threads Basketball . . .

Stay tuned to The Knight’s Lance for continued coverage of 2014-15 Threads Basketball. Until then, though, check out this extended sneak peek at the set’s Leather Rookie Cards, Wood Rookie Cards and High Flyers and ABA Legends inserts.