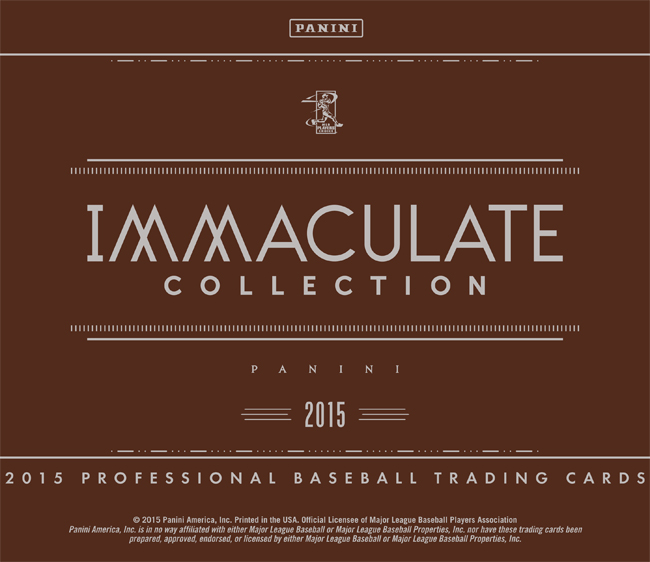 Over the course of the last few weeks here on The Knight's Lance, we've delivered some must-see first looks at the early hard-signed returns for Panini America's upcoming 2015 Immaculate Baseball, the highly anticipated follow-up to last season's remarkable baseball debut. Today, we're prepared to pull the curtain back just a little bit more with a deeper dive into product specifics.

Over the course of the last few weeks here on The Knight’s Lance, we’ve delivered some must-see first looks at the early hard-signed returns for Panini America’s upcoming 2015 Immaculate Baseball, the highly anticipated follow-up to last season’s remarkable baseball debut. Today, we’re prepared to pull the curtain back just a little bit more with a deeper dive into product specifics.

The Immaculate brand’s rousing introduction to America’s pastime last year immediately raised the bar for any future iterations, and Panini America’s Baseball Product Development Team has taken that challenge to heart. For starters, the legendary Babe Ruth has been added to the product’s rich roster of memorabilia content. The Sultan of Swat will appear in seven different game-worn or game-used memorabilia inserts. Trust us, there are other enhancements for the 2015 edition, too.

Bat Knobs and Bat Nameplates have increased in quantity from 10 in 2014 to 70 in 2015; and the spectacular Jumbo Cleats insert, perhaps last season’s most trailblazing inclusion, has expanded its player roster from just six players in 2014 to a whopping 25 in 2015 (featuring the addition of Ichiro, Mike Trout, Kris Bryant and Barry Bonds). 2015 Immaculate Baseball also delivers the baseball debut of the striking Shadowbox Signatures insert featuring on-card autographs from the likes of Bryant, Bo Jackson, Pete Rose, Rickey Henderson, George Brett, Ken Griffey Jr. and more).

Set to release in late August, each six-card box of 2015 Immaculate Baseball will deliver five autograph or memorabilia cards and one base card. As you might expect, the highlights of the product are many and include . . .

We’ll have plenty more on 2015 Immaculate Baseball in the coming weeks right here on The Knight’s Lance. Until then, though, enjoy this first extended sneak peek at the product.

All information is accurate at the time of posting – content is subject to change. Card images are solely for the purpose of design display. Actual images used on cards to be determined.