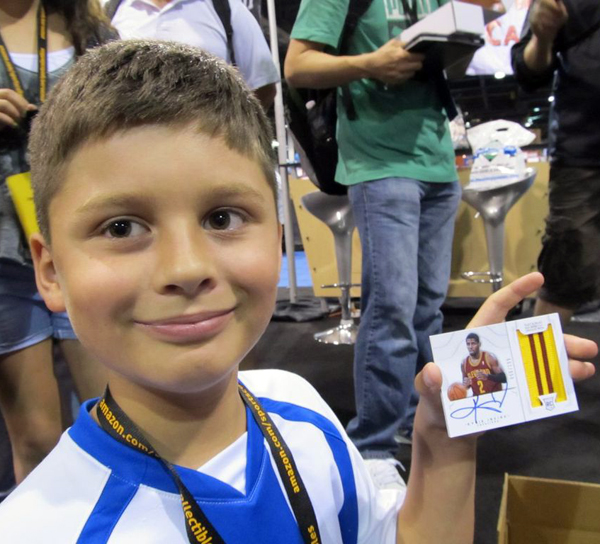 A continually growing line of collectors waiting for the company’s coveted wrapper redemption packs was another good indicator you’d found Panini America at the National. A few folks were lucky enough to score a piece of pizza while waiting to bust open boxes of Brilliance Basketball, Elite Football or Rookie Anthology Hockey. Also garnering a lot of attention was the Redemption Trade-Up counter, which we’ll detail in depth in the next few days right here on The Knight’s Lance.

“If this is any indication, they’re gonna see craziness the next four or five days,” Panini America Marketing Manager Scott Prusha.

What you can always expect with Panini and the National are big hits, none larger than the parade of pulls from 2012-13 National Treasures Basketball that included rookie patch autographs from Kyrie Irving and Anthony Davis. Ten-year-old Kyler Fox shouted “Kyrie” and smiled big when the Irving showed up as part of a case he opened with his dad, Kirk.

Among the early visitors to the Panini America booth was Bob Jackson from Wisconsin, who opened Elite Football to earn his silver packs. Among his pulls was an Isaiah Pead sketch card.

Things kick into high gear on Thursday when Box Wars and live case breaks debut at the Panini America booth. Stay tuned to The Knight’s Lance all week for full coverage of Panini America at the 2013 National. You can follow along with all the action on Twitter using the hash tag #PaniniNSCC.

For now, enjoy the following gallery of images — and a short video diary — detailing a smashing opening day.