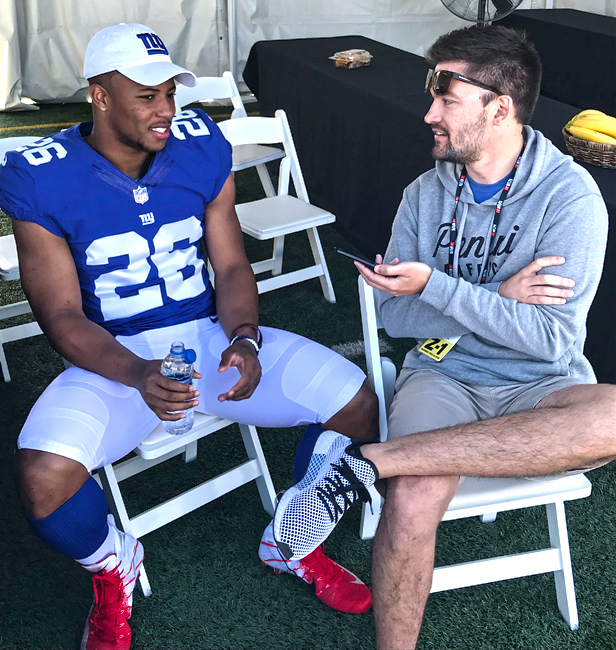 Over the weekend, 40 of the top rookies in the land made the trip to Southern California for the 2018 NFLPA Rookie Premiere Presented By Panini America. Before cameras clicked away during the photo shoot on May 19, the guys adjusted their helmets and tightened their shoulder pads as they rocked their NFL jerseys for the first time. What ensued? Selfies, snaps, shoutouts and pretty much anything else suitable for social media that showcased the players' new threads to the world.

Over the weekend, 40 of the top rookies in the land made the trip to Southern California for the 2018 NFLPA Rookie Premiere Presented By Panini America. Before cameras clicked away during the photo shoot on May 19, the guys adjusted their helmets and tightened their shoulder pads as they rocked their NFL jerseys for the first time. What ensued? Selfies, snaps, shoutouts and pretty much anything else suitable for social media that showcased the players’ new threads to the world.

We Have Arrived
The players departed their Beverly Hills hotel early Saturday morning for the 50-minute trek — shuttles left promptly at 6:30 a.m. — to Cal Lutheran University in Thousand Oaks, Calif. These rookies may have not known that Cal Lutheran with its picturesque mountaintop backdrop once served as the home of Dallas Cowboys training camp for more than 25 years. The site was a change from the usual venues of the Los Angeles Memorial Coliseum (renovations) and the Rose Bowl (Taylor Swift concert), which were unavailable; but all who attended seemed to love the intimacy of the stadium and the hospitality of the staff.

Household names such as Baker Mayfield, Sam Darnold, Saquon Barkley and Calvin Ridley have spent the last few years honing their craft on Saturdays. They were back at work on Saturday last week preparing for their new job — a Sunday gig.

The players weren’t the only newbies getting their feet wet. As a member of Panini America’s Editorial Department, I made my debut at the event, interviewing the first-year players for our world-class products.

The players came to the event after spending the previous two days signing autographs for future Panini America products and fulfilling other marketing obligations. It was clear these fellas possessed a strong work ethic; many grinded and stayed past midnight on the opening day to knock out their signing obligations. But throughout the week, there were plenty of laughs and good times — and that attitude resonated Saturday morning.

Before the shoot even started there was a minor wardrobe malfunction from Barkley. If you think the Giants’ running back wears out defenders with his massive legs, you should see what they did to his socks. The star frayed the elasticity on them as he struggled to pull them over his bowling-ball sized calves.

Once the uniforms were on, the real fun began. Some of the highlights included Baltimore tight end Hayden Hurst explaining how he maintains his ginger-follicled flow — the trick is coconut oil — and Indianapolis wide receiver Daurice Fountain remembering his days as a viola player.

Throughout the day, there was plenty of energy from the group, particularly Mayfield, who showed exactly why he was selected No. 1 overall in the draft. The signal-caller needed just a couple of warm-up throws before he was rocketing passes all over the field, especially one to Panini America Photo Editor Tyrone Varnes, who has since gone viral from the video. Thanks, Baker.

There was even a special guest at the event. Steelers wide receiver JuJu Smith-Schuster was in attendance as a special guest of Panini America and made a surprise appearance to visit with many of the rookies. The star donned fuzzy Gucci kicks while lending advice to new teammates Mason Rudolph, Jaylen Samuels and James Washington.

Even at a casual event, the rookies couldn’t help but compete. Before breaking for lunch, a crowd gathered at the tire-swing station to watch the players test their accuracy. Cincinnati’s Mark Walton, Baltimore’s Lamar Jackson and Arizona’s Christian Kirk were among the many launching throws. But no one was more impressive than the aforementioned Barkley . . .

When in doubt, the @Giants can handoff to @saquon . . . or let him throw. ? #WhoDoYouCollect #RookiePremiere pic.twitter.com/NktczhpKWa

After striking some poses and showing off their skills on the field, the group sat down for one-on-one interviews and dished on topics ranging from their first jobs to their go-to karaoke songs. One of the main themes during the interviews was food. Some were still adjusting to the cuisine of their new city while others reminisced about old favorites.

Here are some of the best responses for you to snack on:

Buffalo quarterback Josh Allen: “I’m on the wing movement. I gotta say wings though, not chicken wings. If I say chicken wings in Buffalo, they get mad.” #WingingIt

Chicago wide receiver Anthony Miller: “I am in Chicago and that deep dish is king there. I really like the pizza at Giordano’s. I know I shouldn’t be eating it, but man, it’s so good.” #DiggingDeep

Cleveland quarterback Baker Mayfield: “My favorite dessert is blackberry cobbler, especially the one my grandma makes. It’s so good because it has a little taste of love in there.” #GrannyLove

These guys have new jobs now, but for many of the rookies this isn’t their first time working:

Atlanta wide receiver Calvin Ridley: “I worked as a janitor at a middle school. It was hard. I signed up for this summer thing. They choose the job for you and I was a janitor. It was not fun.” #TidyTime

Pittsburgh quarterback Mason Rudolph: “I worked for my dad’s real estate company. I did some lawn care for them for a few summers throughout my childhood.” #GreenerPastures

Miami tight end Mike Gesicki: “I was a busboy at a Mexican restaurant from like eighth grade to my junior year of high school. My sisters were waitresses so I kind of got my foot in the door from them. It was only during the summers.” #ServiceIndustry

The group also talked about skills they possess (and don’t possess) away from the gridiron:

Arizona wide receiver Christian Kirk: “I can skateboard. I’ve done it since I was like 6 or 7. I can do a kickflip, pop shove-it, heelflip.” #ShreddingIt

San Francisco wide receiver Dante Pettis: “I’m big into art. I take a lot of pictures. I majored in creative writing so I write a lot and read a lot.” #FinerThings

Baltimore quarterback Lamar Jackson: “I went to Topgolf and I sucked. That was my first time ever. That was in 2017. I hit the golf ball and it went backward. Everybody was laughing. They put it on Twitter and stuff. I told them this was my first time so don’t record but they still recorded me.” #MulliganMoment

Here are some other highlights from the weekend:

Houston wide receiver Keke Coutee on what he would be doing if he wasn’t playing football: “I think I might be playing basketball somewhere, probably still in college. I played basketball all my life but obviously I’d be height challenged in basketball.” #HoopDreams

Buffalo quarterback Josh Allen on Halloween: “I hated Halloween. I never wanted to be anything else. I just wanted to be a football player and my mom always bought me these ninja outfits and all this. I just couldn’t do it.” #BooMom

Denver running back Royce Freeman on his first car: “It was a red Ford Explorer in high school. It had no auxiliary cord. I had to get blank CDs and make my own mixes. It was always hard for me because it only had a little more than an hour worth of space. It was hard to decide which songs could make the cut or not.” #DJDecisions

New York Jets quarterback Sam Darnold on his first concert: “Stagecoach. It was my freshman year of college. I didn’t go to concerts when I was in high school or anything like that. Stagecoach was a good first one to go to.” #OnBoard

Panini America Staff Writer Nolan Imsande on the weekend: “This event was a blast, having the opportunity to get to know these guys I’ve been watching on TV the last two or three years was incredible. And really, there’s no way to overstate how much fun and cooperative the 40 players were. Can’t wait to watch them on Sundays.” #WhoDoYouCollect

Look for more of Imsande’s interesting findings coming to Panini America card backs throughout the 2018 NFL season. And visit the official online store of Panini America to collect the unique Panini Instant Rookie Cards created during the 2018 NFLPA Rookie Premiere.

Nolan Imsande is a Staff Writer for Panini America.