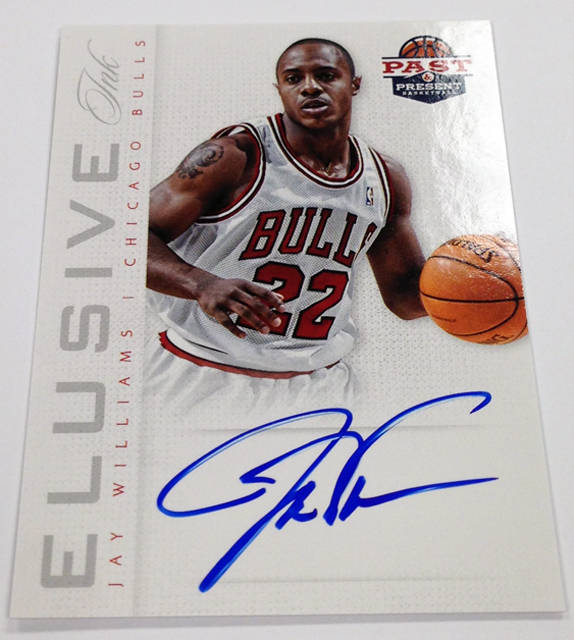 In the sports card industry, nine years might as well be an eternity. So you'll understand when basketball fans and collectors respond to the Jay Williams autographs in Panini America's 2012-13 Past & Present Basketball as if they'd never seen any before. For the record, collectors haven't seen Williams cards of any kind since the 2003-04 season.

In the sports card industry, nine years might as well be an eternity. So you’ll understand when basketball fans and collectors respond to the Jay Williams autographs in Panini America’s 2012-13 Past & Present Basketball as if they’d never seen any before. For the record, collectors haven’t seen Williams cards of any kind since the 2003-04 season.

Williams, you may recall, was one of the greatest young basketball talents of all time when he entered the NBA as the second overall pick of the Chicago Bulls in the 2002 NBA Draft. All Williams did prior to that was lead Duke to the 2001 NCAA National Championship and earn Naismith College Player of the Year honors, the John R. Wooden Award and the Oscar Robertson Trophy.

As a result, Williams entered the NBA to wildly high expectations and spent most of his rookie season in the Bulls’ starting lineup, where he dropped a triple-double on the Nets in just his seventh career start. But not long after his rookie season, in June of 2003, Williams suffered a horrific motorcycle accident that essentially ended his career after just 54 starts. He would never again step foot on an NBA court.

Williams was featured on a handful of trading cards during the 2003-04 season but has appeared on nothing since. But just like Williams’ real-life story, his trading-card tale has a happy ending, too.

Today, Williams is a successful college basketball analyst with ESPN, a true inspiration to millions and then some. Tomorrow, when Panini America’s 2013-13 Past & Present Basketball releases, he’ll appear on new autographed basketball cards for the first time in nine years.

On the eve of that milestone, Williams was nice enough to answer a few questions for Panini America and The Knight’s Lance.

This is your first trading card of any kind since the 2003-04 season? What are your thoughts on returning to the trading card arena after a decade away?
“I am very enthusiastic and very excited. I look forward to playing a role in a space that I have not been in long time. It’s an honor to come back into the trading card world and to work with Panini America.”

The fact that we’re putting you in our 2012-13 Past & Present set is a clear indication that basketball fans and collectors still want to collect your cards? What does that mean to you?
“There is a level of accomplishment I feel because being so far removed from the game for so long, it is a clear indication of how others view me and I am very appreciative of that; and again, I’m honored to know so many people are still rooting for me, and out there supporting me in my life after basketball.”

If you want fans and collectors pulling this card to know one thing about Jay Williams, what would it be?
“A fighter in every aspect.”