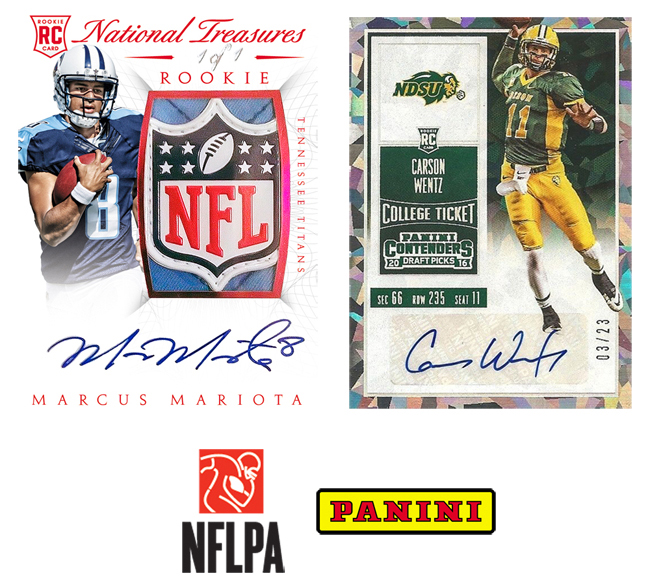 Panini America, the exclusive trading card manufacturer of the NFL and NFL Players Association (NFLPA), in conjunction with NFL Players Inc., the licensing and marketing arm of the NFLPA, today unveiled the inaugural edition of the NFLPA Panini Trading Card Index, a new quarterly report which will rank the top-performing football players in the licensed trading card industry.

Panini America, the exclusive trading card manufacturer of the NFL and NFL Players Association (NFLPA), in conjunction with NFL Players Inc., the licensing and marketing arm of the NFLPA, today unveiled the inaugural edition of the NFLPA Panini Trading Card Index, a new quarterly report which will rank the top-performing football players in the licensed trading card industry.

Once a quarter, the NFLPA Panini Trading Card Index will rank the top 15 rookies and top 15 veterans based on several key factors, including secondary-market transactions, overall trading volume and collectability based on on-field performance and expectations (e.g., Rookie hype and collector speculation). The premiere NFLPA Panini Trading Card Index, listed in its entirety below, includes the first official rankings for the 2016 NFL Draft class based largely on early trading activity surrounding Panini America’s 2016 collegiate product Contenders Draft Picks Football, which was  released on March 23.

“It’s an honor any time I can be number one on a list that includes Tom Brady, Aaron Rodgers and Russell Wilson,” Marcus Mariota said. “The work I put in with Panini signing cards in my rookie year seems to be appreciated by collectors as I head into season two, which is extremely rewarding. It will be great if I can keep showing up on this Index for a long time.”

“Wow, it is pretty incredible to see my name at the top of Panini’s new trading card index before I have even joined an NFL team,” Carson Wentz said. “I really appreciate the fans and collectors who are showing support and faith in my abilities to perform as an NFL player. I look forward to working with Panini to create more trading cards and to earn my place on this list.”

“The premiere NFLPA Panini Trading Card Index comes at the perfect time,” said Jason Howarth, Panini America’s Vice President of Marketing. “The rookie list reflects the level of excitement and speculation fans and collectors have for the key players in the upcoming 2016 NFL Draft. Conversely, the veteran list offers something of a recap of the 2015 NFL season based on trading-card performance and is driven by last season’s most impressive rookies and veteran superstars.”

“The new NFLPA Panini Trading Card Index is an excellent example of the creativity that Panini brings to the trading card market,” said Steve Scebelo, NFLPA Vice President of Licensing & Business Development. “It presents a singularly unique snapshot of players in all stages of their careers who have the ability to drive results on the field and at retail.”