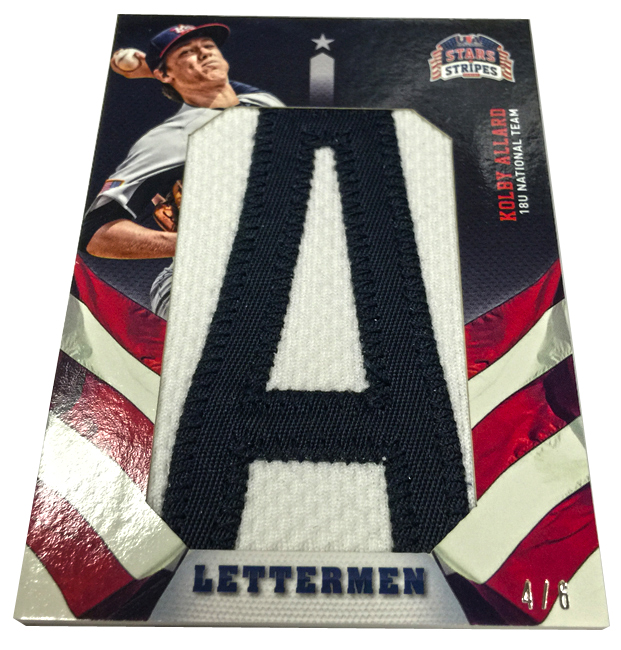 Indeed, when the Arizona Diamondbacks selected Vanbderbilt shortstop and former USA Baseball star Dansby Swanson with the first overall pick last night, it triggered a trend of sorts that would last throughout the first round. For as Swanson may have been the first player selected Monday night whose only licensed trading cards are made by Panini America, he wasn’t the last. Seven other first-round picks — including Dillon Tate (fourth), Tyler Jay (sixth), Trenton Clark (15th), James Kaprielian (16th), D.J. Stewart (25th), Christin Stewart (34th) and Kyle Funkhouser (35th) — also appear only in Panini America products.

It’s an advantage that speaks volumes about the company’s exclusive relationship with USA Baseball — and one that makes those unique products the only place to go for the first licensed cards of baseball’s future stars.

“USA Baseball was thrilled to have two of last year’s Collegiate National Team alums, Dansby Swanson and Alex Bregman, selected with the first two picks of this year’s MLB Draft,” said David Perkins, USA Baseball’s Chief Operating Officer. “Hearing the names of so many players called who have represented the United States with Team USA — nine of the first 20 players drafted this year played for the organization — always makes the draft a special time for the USA Baseball family and fans.

“As part of the organization’s support from Panini America, we are thrilled to once again have had the opportunity to include many of these players on their first trading cards during their time with the national teams. We look forward to continuing this tradition in the years to come.”

In all, 12 of last night’s first-round picks have appeared in one or more of Panini America’s USA Baseball sets, most recently in the April release of 2015 Stars & Stripes USA Baseball. A 13th player, Daz Cameron, was selected 37th overall to start the first competitive balance round.

Below, we offer a quick breakdown of the players selected last night who have cards in Panini America USA Baseball products. After that, we deliver a must-see gallery of some of the bigger autograph and memorabilia cards of each player.