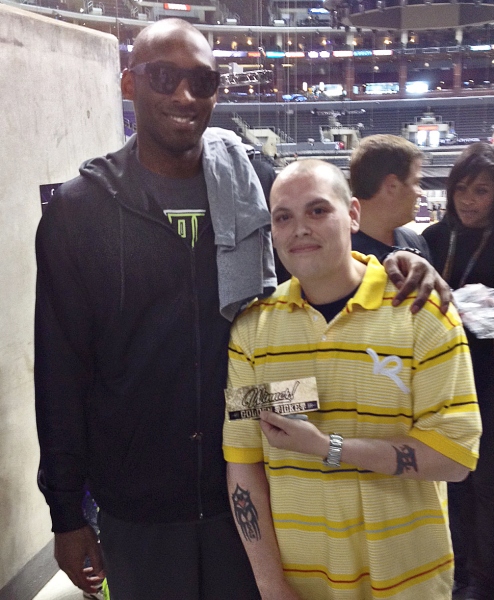 LOS ANGELES -- Ohio collector Nick Gauder inadvertently created a firestorm of controversy last week when he admitted to Beckett.com that he passed on an offer of $20,000 for the Golden Ticket he pulled last year from 2010-11 Gold Standard Basketball that guaranteed him the opportunity to meet Los Angeles Lakers superstar Kobe Bryant.

LOS ANGELES — Ohio collector Nick Gauder inadvertently created a firestorm of controversy last week when he admitted to Beckett.com that he passed on an offer of $20,000 for the Golden Ticket he pulled from 2010-11 Gold Standard Basketball.
That once-in-a-lifetime pull guaranteed Gauder the opportunity to meet Los Angeles Lakers superstar Kobe Bryant. But as it turns out, it guaranteed him so much more than that.

Still, the fact that the single father of two refused that much money led to some very public feedback from the collecting community — which ranged from warm support to knee-jerk irrationality to ill-advised vitriol. Although Gauder admitted to being taken aback by the brouhaha at first, he never once second-guessed his decision. After the weekend he had, here’s betting he never will.
“There is no amount of money that could replace these memories,” Gauder said Sunday night.
Gauder and his mom, Lani, spent a whirlwind five days in Los Angeles that included Nick’s first airplane ride, his first NBA game (the Lakers’ 112-108 overtime victory over the Dallas Mavericks) and, of course, meeting Bryant in Staples Center after the game. Bryant’s injured shin kept him from playing Sunday afternoon, but it didn’t prevent him from making a lasting impression on the Gauders.
But even after exchanging hugs and handshakes with the five-time NBA champion, the Gauders still had more history to make. Later Sunday night, Nick met his grandfather — for the first time. And Lani saw her sister for the first time in 42 years. It was an incomprehensibly blissful end to a surreal day.
“What a great way to end one of the greatest days of my life,” Nick said. “I will never forget it. The greatest weekend ever.”
Thanks to Panini Authentic’s Brian Bayne and special Panini America correspondent Jon Gold, we were able to compile the following gallery and three-part video diary documenting the monumental moments. After you’ve checked out the images, stay tuned for the must-see videos, including some unexpected parting gifts.
First, the three-part video diary:
Part 1: Preparing to Meet Kobe