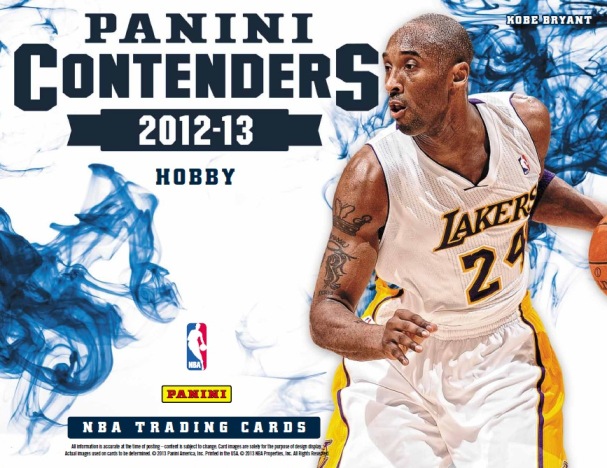 Hey, let’s be honest: We all can use at least a little break from tonight’s wall-to-wall, budget-busting coverage of the 2012 presidential election that’s likely dominating any television you’re watching. To that end, we thought right now provided us the perfect opportunity to separate the pretenders from the contenders (or at least shed a little light on an all-new Contenders).

For the first time since 2009-10 (Panini America’s first season as the exclusive manufacturer of NBA trading cards), hoops collectors will have a Contenders-branded basketball release to call their own. After missing the 2011-12 season and temporarily morphing into Contenders Patches for 2010-11, Contenders Basketball is making a huge comeback for 2012-13.

Due out in early January, just a few weeks prior to Barack Obama or Mitt Romney taking office, 2012-13 Contenders Basketball will deliver four autographs in every 20-pack box, with at least three of those autographs being Rookie Cards. The 200-card base set features 100 rookie autographs, three parallels (Silver, Gold and Black), three unique autograph inserts and one 100-card memorabilia insert.

In addition, the product also includes a pair of base insert sets with extremely long odds in Hall of Fame Contenders (one in 20 cases) and Throwback Rookie Tickets (one in 13 cases).

Now, we know you need to get back to election coverage. But before you go, check out the following preview gallery and stay tuned to The Knight’s Lance for additional information on 2012-13 Contenders Basketball.