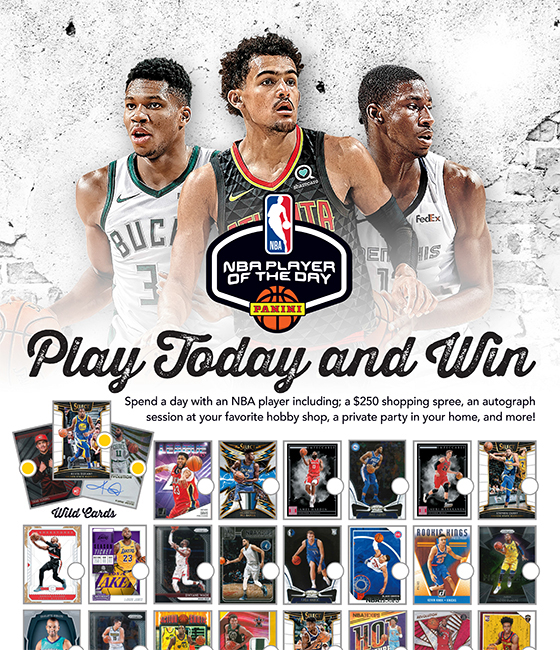 As NBA teams prepare for the playoffs and a run to the NBA Finals, NBA trading card collectors will be playing for more than 100,000 prizes at hobby shops across the U.S.,  including the chance to spend a day with an NBA player in the 2019 Panini NBA Player of the Day promotion.

As NBA teams prepare for the playoffs and a run to the NBA Finals, NBA trading card collectors will be playing for more than 100,000 prizes at hobby shops across the U.S.,  including the chance to spend a day with an NBA player in the 2019 Panini NBA Player of the Day promotion.
For the fourth consecutive season, more than 400 hobby shops will be awarding prizes to collectors through April 14 when they pull the designated NBA Player of the Day from a pack of Panini NBA trading cards. A list of the 430+ participating hobby shops is available on the Hobby Shop Locator at www.PaniniPOD.com.

Every time a collector purchases a pack of Panini America NBA trading cards at a participating hobby shop hosting the Panini NBA Player of the Day promotion, they are one step closer to spending the day with an NBA player. Over the past three years, lucky collectors in Indiana, California and Minnesota got to “spend the day” with Pacers rookie Aaron Holiday, Lakers legend Shaquille O’Neal and Timberwolves All-Star Karl-Anthony Towns. Highlights of these events are available here.
“The Player of the Day promotion helps hobby shops sell more trading cards while rewarding collectors who purchase Panini America products,” said Jason Howarth, Vice President of Marketing for Panini America. “We are thrilled to support hobby shops selling our NBA trading cards by expanding this proven promotion to even more hobby shops. We look forward to creating more memorable experiences for collectors this year.”
How it Works
The centerpiece of the promotion is a poster featuring Panini America card images of one player from each of the 30 NBA teams. Each day, a different player on the poster is designated as the “Panini NBA Player of the Day” while Panini spokesmen Kevin Durant, Trae Young and Kyrie Irving are “Wild Cards” for the duration of the promotion. Every time a collector purchases a pack of officially licensed Panini NBA trading cards and pulls the player of the day or a wild card, they win a prize. Each week, stores will conduct a drawing from the daily winners to award a weekly prize.
Then, at the end of the month-long promotion, each store will award a grand prize to its store winner, who will be entered into the national sweepstakes. In addition to the grand prize, national sweepstakes runners-up will receive NBA POD autographed cards of Kyrie Irving, Damian Lillard, Grant Hill, Allen Iverson, Tracy McGrady and Kobe Bryant numbered to two.
Each participating shop receives a free kit with the materials needed to run the promotion, including promotional posters, shopping bags, Charles Barkley posters, exclusive Panini NBA POD promo packs, a Panini NBA POD autographed card, T-shirts and Ultra Pro card holders all emblazoned with the Panini NBA Player of the Day logo.
The exclusive autograph cards are slabbed in a protective case by BGS with each shop receiving one card to award to their grand prize winner. The checklist boasts an impressive lineup of more than 30 rookies, All-Stars and young stars including John Collins, Caris LeVert, Kemba Walker, Lauri Markkanen, Collin Sexton, Michael Porter Jr., Jaren Jackson Jr., Marvin Bagley III, Donte DiVincenzo, Kevin Knox, Mo Bamba, Lonnie Walker IV, Grayson Allen and more. Additionally, a 40-card rookie memorabilia set offers all of the top rookies including DeAndre Ayton, Trae Young and Luka Doncic.
The exclusive 2018-19 Panini NBA Player of the Day card set includes a 30-card base set with four parallel sets numbered to one, five, 10 and 15, respectively, as well as a 20-card rookie set with parallels numbered to one, 10, 20 and 30, respectively. There is also a three-card Kobe Bryant set and a seven-card NBA Legends set each with four parallel versions numbered to one, 10, 20 and 30.
Collectors can also get to enjoy the promotion and win autograph cards and other promotional items via social media by following the @PaniniPOD Twitter account and Facebook page.
In the gallery that follows, we offer a must-see peek showcasing many of the cards featured in the program.