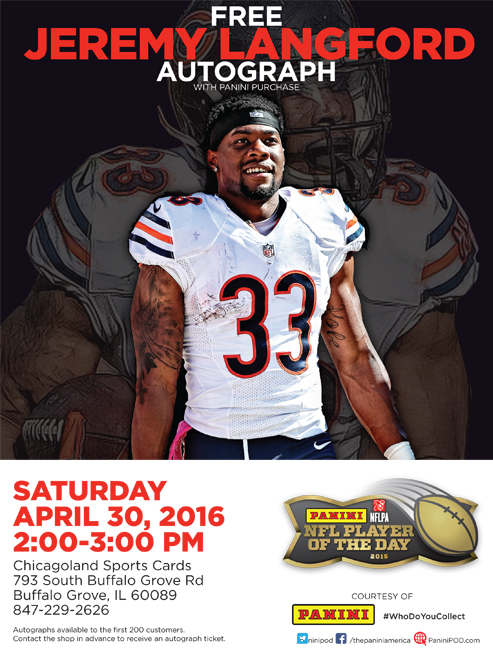 When Illinois collector Rick Brodsky bought a pack of officially licensed Panini America NFL trading cards at Chicagoland Sports Cards in Buffalo Grove, Ill., last fall, he was hoping to get a card of one of his favorite players, a memorabilia card or possibly even an autograph. Little did he know that his $2 card pack would lead to spending a day during 2016 NFL Draft weekend with Chicago Bears running back Jeremy Langford.

When Illinois collector Rick Brodsky bought a pack of officially licensed Panini America NFL trading cards at Chicagoland Sports Cards in Buffalo Grove, Ill., last fall, he was hoping to get a card of one of his favorite players, a memorabilia card or possibly even an autograph. Little did he know that his $2 card pack would lead to spending a day during 2016 NFL Draft weekend with Chicago Bears running back Jeremy Langford.

Brodsky, a 35-year-old sports fan who collects football cards of Bears and Penn State players, was among the more than 150,000 NFL collectors who participated in the 2015 Panini NFL Player of the Day contest at more than 600 hobby shops last fall. Brodsky is among the thousands who earned prizes, but as the Grand Prize winner, he is the only one spending next Saturday with an NFL player. His journey began just like thousands of other collectors when he uncovered the Panini NFL Player of the Day in a pack of Panini NFL trading cards. He was then randomly selected as Chicagoland’s grand prize winner and entered into the national sweepstakes with 600 other shop winners.

As part of his prize, Brodsky will host a private party at his home for Langford with up to 25 friends and family members. All of the party guests will get up close and personal with Langford, the Bears’ breakout 2015 rookie. Party guests will also receive a photo, an autograph and the chance to hear Langford’s favorite NFL Draft memories and stories from his rookie season.

Following the party, the crew will take a limousine ride to Chicagoland Sports Cards during which Brodsky will receive a $250 shopping spree courtesy of Panini America. At the shop, the entire community will join in as winners as Langford will spend an hour signing free autographs and posing for photos with up to 200 customers.

“In every pack of Panini America NFL trading cards, fans and collectors have a chance to get closer to their favorite NFL player. That’s usually through uncovering a card, a piece of memorabilia or an autograph,” said Jason Howarth, Panini America’s Vice President of Marketing. “Rick truly hit the jackpot in one of his packs. We’re excited to host this special day for him, his family, his friends and all the loyal customers of Chicagoland Sports Cards.”

After backing up Le’Veon Bell for two seasons at Michigan State, Langford rushed for more than 2,900 yards and 40 touchdowns in 2013 and 2014. Despite those impressive numbers, Langford lasted until day three of the 2015 NFL Draft before the Bears selected him in the fourth round with the 106th overall pick. Langford’s rookie season started slowly, but an injury to Matt Forte in Week 7 opened the door for Langford’s impressive second half that included 538 yards rushing and six touchdowns.

“Since the birth of my son, I haven’t been able to collect as much as in the past, but I hope one day when he is old enough we can collect together,” Brodsky said. “My dad and I had so much fun going to card shops and shows on weekends so I would love to pass this hobby on to my son. I can’t wait to share this experience with my friends, family and fellow collectors that I see every weekend at Chicagoland Sports Cards. “Thanks to Marc and Les Goldsmith at Chicagoland for providing a friendly and trustworthy shop in this fun hobby.”

Stay tuned to The Knight’s Lance and Panini America’s social media channels for complete coverage of next Saturday’s event.