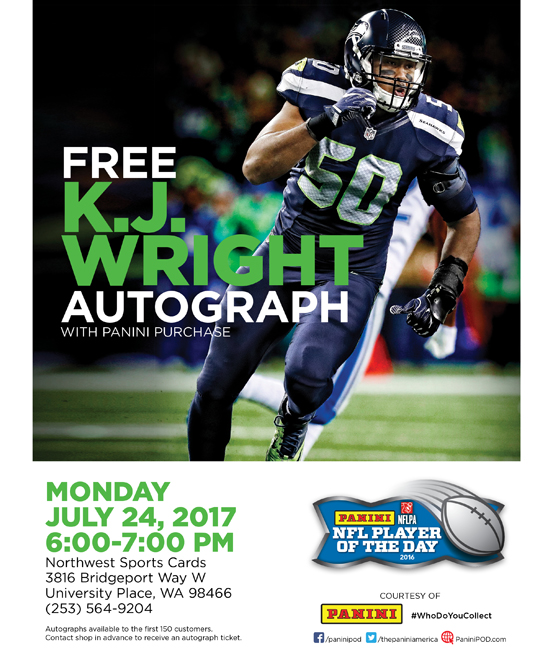 When 11-year-old trading card collector Tommy Dickerson bought a pack of officially licensed Panini America NFL trading cards at Northwest Sports Cards in University Place, Wash., the Tacoma native was hoping to get a card of one of his favorite players, perhaps a memorabilia card or, possibly, even an autographed card. Little did he know that one pack would lead to him spending July 24 with Seattle Seahawks All-Pro linebacker K.J. Wright.

When 11-year-old trading card collector Tommy Dickerson bought a pack of officially licensed Panini America NFL trading cards at Northwest Sports Cards in University Place, Wash., the Tacoma native was hoping to get a card of one of his favorite players, perhaps a memorabilia card or, possibly, even an autographed card. Little did he know that one pack would lead to him spending July 24 with Seattle Seahawks All-Pro linebacker K.J. Wright.

Dickerson was among more than 150,000 NFL card collectors who participated in the 2016 Panini NFL Player of the Day contest at more than 600 hobby shops last fall. He is among the thousands who earned prizes, but as the Grand Prize winner, he is the only one spending the day with an NFL player. His journey began just like thousands of other collectors when he uncovered the Panini NFL Player of the Day in a pack of Panini America NFL cards. He was then randomly selected as the store’s grand prize winner and was entered in the national sweepstakes with 600 other shop winners.

“Tommy is one of the nicest and most appreciative 11-year-olds you will ever know,” said Don Knutson, owner of Northwest Sports Cards. “We were elated to hear Tommy was the grand prize winner as he epitomizes the type of collector we all should want to represent our great hobby. He typically visits our store a couple times a week with his parents and grandparents but during the Player of the Day promotions we see him twice as often.”

His special day will begin with Wright attending a private party at the Dickerson family home in Tacoma for 25 friends and family members. Dickerson will show the Seahawks star his card collection, toss the football around, conduct a Q&A, pose for photos and get autographs for his guests. Following the party, Wright, Dickerson and some of his friends will take a limousine to Northwest Sports Cards at which up to 150 of the shop’s best customers will get a free autograph and photo with the Seahawks linebacker.

Dickerson, who has been collecting cards for almost five years, primarily collects football and baseball cards. He says he visits Northwest Sports Cards approximately two times per week and, if he’s not out of town at a baseball or basketball tournament, he never misses the monthly Saturday Night Pack Wars. He performs chores and saves his birthday presents to fund his hobby but once he turns 16, he plans to get a job at Northwest Sports Cards. For the past three years he has been a regular participant in the Panini NFL Player of the Day – winning the shop’s grand prize each year including autographed cards from Earl Thomas, Paul Richardson and Alex Collins.

“It’s exciting to see Tommy’s passion for collecting cards and we can’t wait for this unforgettable day for him, his friends, family and the loyal customers at Northwest Sports Cards,” said Jason Howarth, Panini America Vice President of Marketing. “In every pack of Panini NFL trading cards, collectors have a chance to get closer to their favorite NFL player. That’s usually through uncovering a card, a piece of memorabilia or even an autograph. But every year we truly bring the experience to life for one lucky winner in the NFL Player of the Day promotion. It’s always fun when the winner is a young collector because this promotion deepens their connection to the hobby.”

Stay tuned to The Knight’s Lance for complete coverage of next week’s big event. 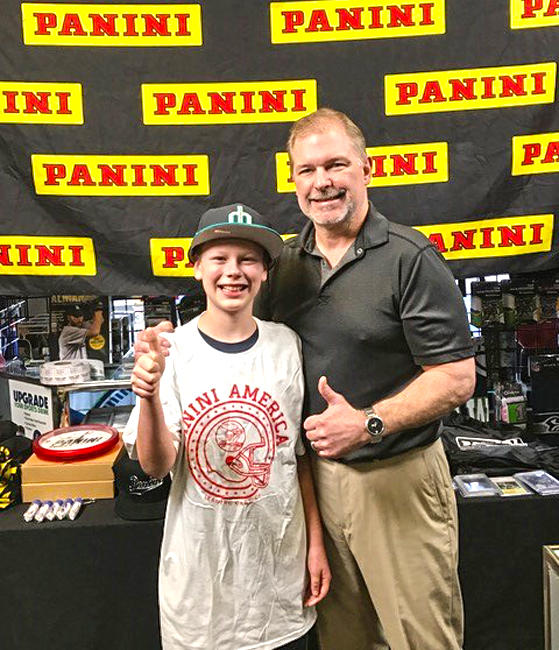