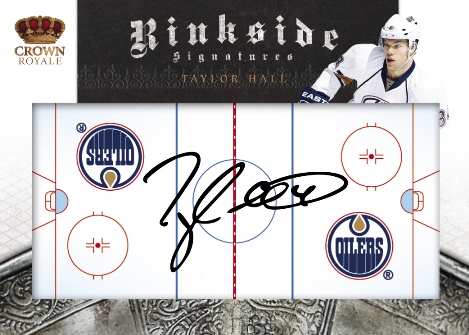 One of the true crowning achievements of the 2010-11 NHL trading card season arrives just after the New Year with the arrival of 2010-11 Crown Royale Hockey.

One of the true crowning achievements of the 2010-11 NHL trading card season arrives just after the New Year with the arrival of 2010-11 Crown Royale Hockey.

The wickedly innovative, abundantly royal release is unlike anything else on the hockey market today and will deliver one autograph or memorabilia card per pack and a whopping 14 autographs (at least) per case.

The Rookie Die-Cuts insert idea from 2010 Crown Royale Football that has created an industry-wide buzz in the last week will be taken a step further in Crown Royale Hockey with Rookie Silhouettes Rookie Cards that are signed on-card. The product also is bolstered by the revolutionary Rinkside Signatures that includes such notable penmen as Taylor Hall, Joe Sakic, Alex Ovechkin and Mario Lemieux.

On the memorabilia front, Crown Royale promises to deliver some truly sweet swatches that are fit for, well, a king.

The only bad news? Impatient hockey collectors (and let’s be honest, who wouldn’t be impatient after seeing this preview?) will have to wait until January 5 to get their hands on 2010-11 Crown Royale Hockey.

Until then, spend some quality time with the breathtaking gallery below and stay tuned to The Knight’s Lance, the Panini America website, and our Twitter and Facebook pages for more information.