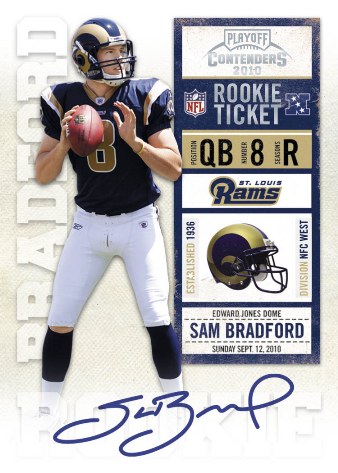 Playoff Contenders Football, one of the most popular brands in sports card history, is slated to enchant collectors once again when the 2010 edition releases in early January.

Playoff Contenders Football, one of the most popular brands in sports card history, is slated to enchant collectors once again when the 2010 edition releases in early January.

Collectors have long considered Contenders the gold standard for NFL Rookie Cards. In 2010, that phrase takes on a most literal meaning with the pioneering introduction of “The Golden Ticket,” the industry’s first 14-karat solid-gold trading card.

Also new for this season are a strikingly fresh Rookie Ticket design, all on-card autographs for RPS Rookie Tickets and Rookie Ink cards, and the introduction of the attractive Super Bowl Ticket insert set.

Each 24-pack box of 2010 Playoff Contenders ($6 pack SRP) should yield four autographs (at least one on card), six Super Bowl Tickets, and two cards each from the Rookie of the Year Contenders, Draft Class, Rookie Roll Call, Legendary Contenders and three additional parallels or inserts.