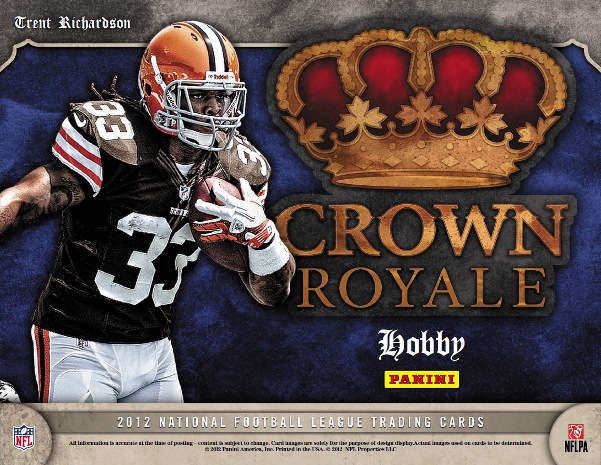 Cue the trumpets, break out the regal robes and prepare to take a seat at your collecting throne of choice: 2012 Crown Royale Football is coming.

Cue the trumpets, break out the regal robes and prepare to take a seat at your collecting throne of choice: 2012 Crown Royale Football is coming.

Due out in December and set to deliver a collecting experience fit for a king, 2012 Crown Royale Football will be headlined by the return of Rookie Silhouettes Signatures, some of the football hobby’s most uniquely ornate RCs featuring on-card autographs, prime memorabilia pieces and numbering to 349 or less. What’s more, the popular Panini’s Choice autographed pyramid die-cuts make their football debut this season in Gold, Blue, Purple and Green parallel versions.

2012 Crown Royale Football will feature a 150-card base set, 100 Rookies numbered to 399 and the aforementioned 35 Rookie Silhouettes Signatures; each four-pack box will yield one Rookie Silhouettes Signature, one Rookie Autograph, two additional autograph or memorabilia cards, two other RCs, four parallels, one Pivotal Players, one Majestic Motion, one Field Force and one NFL Regime.

Some of the product’s crowning achievements include . . .

We’ll have tons more on 2012 Crown Royale Football right here on The Knight’s Lance in the coming weeks. But for now, enjoy your first extended look at the product: