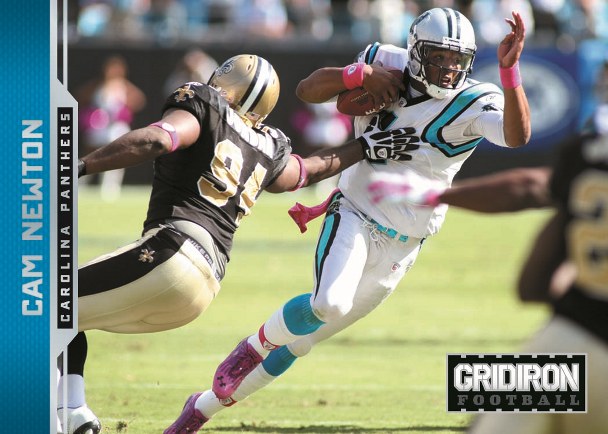 For starters, know this: That headline up top is not a typo. We didn't inadvertently and inexplicably forget to use the word "Gear" next to the word "Gridiron" there. Clearly, Panini America's 2012 Gridiron Football is not the same Gridiron Gear you're used to.

For starters, know this: That headline up top is not a typo. We didn’t inadvertently and inexplicably forget to use the word “Gear” next to the word “Gridiron” there. Clearly, Panini America’s 2012 Gridiron Football is not the same Gridiron Gear you’re used to.

In an NFL collecting season that so far has included — and will continue to include — numerous upgrades and improvements by Panini America, 2012 Gridiron Football, due out in October, is next in line.

Aside from a name change, there’s the radical base-set redesign incorporated to highlight stunning photography that captures the intensity and excitement of the NFL on every card. There’s also a slew of refreshing new insert and parallel designs. Even the trademark Rookie Gridiron Gems Autographs, football’s most unique Rookie Cards, are different this season — pulling up from the top of the card as opposed to pulling out from the side.

This is a new Gridiron for a new season. But just because “Gear” has been dropped from the product’s title doesn’t mean game- and event-worn gear has been dropped from the product. Each box of 2012 Gridiron Football (eight cards per pack, 18 packs per box) will deliver four autograph or memorabilia cards (at least two autographs guaranteed), 18 RCs, three Silver X’s parallels, one Gold X’s parallel and 10 additional inserts from a lineup that includes Crash Course, Arms Race, Aerial Assault and Monday Night Heroes.

Other highlights of Gridiron (200 base cards, 100 Rookie Cards, 35 Rookie Gridiron Gems Autographs) include . . .

We’ll have so much more on the new-and-improved Gridiron Football right here on The Knight’s Lance in the weeks to come. But for now, enjoy this extended first look at the product.