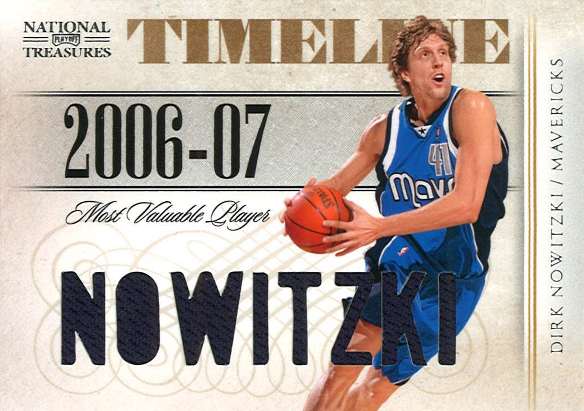 Sixteen hours later and it's still hard to believe: The Dallas Mavericks are NBA Champions.

For those in the Dallas-Fort Worth Metroplex (and most likely all across the country), the Mavericks’ stirring triumph over Dwyane Wade, LeBron James, Chris Bosh and the favored Miami Heat in six games likely still hasn’t quite sunk in.

Not to worry. As the days pass, the big-game exploits of Finals MVP Dirk Nowitzki and his stellar supporting cast of Jason Terry, Jason Kidd, J.J. Barea, Tyson Chandler, Shawn Marion and seemingly everyone else on the Mavs’ roster will only grow in stature here locally. Heck, by the time the next NBA season starts, folks in these parts will be thinking “repeat.”

But before all of that, we thought we’d pay tribute to the champs as only Panini America — the exclusive manufacturer of the NBA — can with this greatest-hits collection of some of our sweetest game-worn memorabilia and autographed Dallas Mavericks trading cards from the last few seasons.

Here’s betting many of the Mavericks fans and collectors viewing the following gallery already have some of these cards in their collections. If not, know that the prices just went up — way up — following the events of last night. Enjoy, and congratulations to the 2010-11 NBA Champion Dallas Mavericks. Man, that still sounds weird.

10 Replies to “Panini Presents: A Collectible Tribute to the 2010-11 NBA Champion Dallas Mavericks”