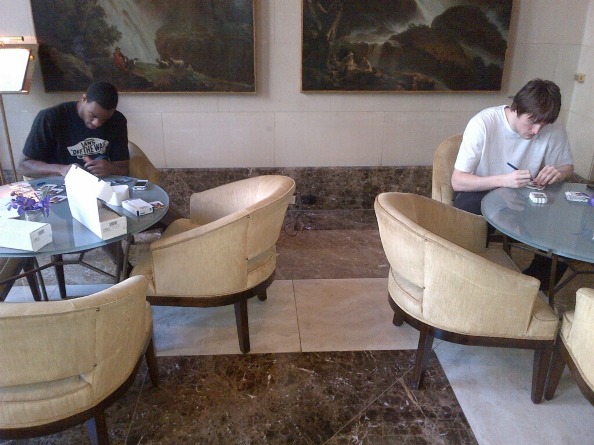 For most of the last month, Panini America NBA acquisitions maven Ivory Tabb has been on the road in one NBA city or another tracking down as many on-card autographs as possible for the upcoming 2011 Preferred Basketball. Along the way, the road-weary Tabb has regaled us with entertaining behind-the-scenes insight from some of the top stars in the game.

For most of the last month, Panini America NBA acquisitions maven Ivory Tabb has been on the road in one NBA city or another tracking down as many on-card autographs as possible for the upcoming 2011 Preferred Basketball. Along the way, the road-weary Tabb has regaled us with entertaining behind-the-scenes insight from some of the top stars in the game.

It should come as no surprise, then, that Tabb is traveling again this weekend — along with several other members of the Panini America — to the 2012 NBA All-Star Game in Orlando. But before she left, Tabb, , a former star on VH1’s “I Want to Work for Diddy,” provided one final batch of anecdotes and images from her just-completed cross-country Preferred tour.

Now as always, we’re sure you’ll enjoy her tales from the road, which should also give you a much deeper appreciation for the finished product when it releases later this month. 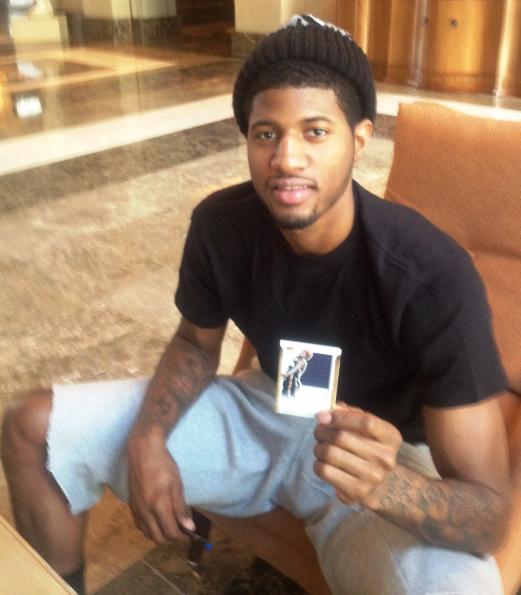 Paul George
“The Pacers were excited because they had a day off. Paul is in his second year and said he loves playing in Indiana now because they are winning. He said this was the best year of his life. He had teammate Dahntay Jones, the team prankster, with him. They told jokes back and forth the entire time. Paul just happened to walk by and I recognized him and said, ‘Oh have a seat, you’ve gotta sign some cards.’ Dahntay said I ‘straight jacked’ their schedule and made PG have a seat. Paul said he knew he had to sign cards but totally forgot. He said his pregame meal isn’t hot wings but he does need some kind of chicken. To get hyped and ready for the game he has Lil Wayne, Meek Mill and Rick Ross on heavy rotation.” 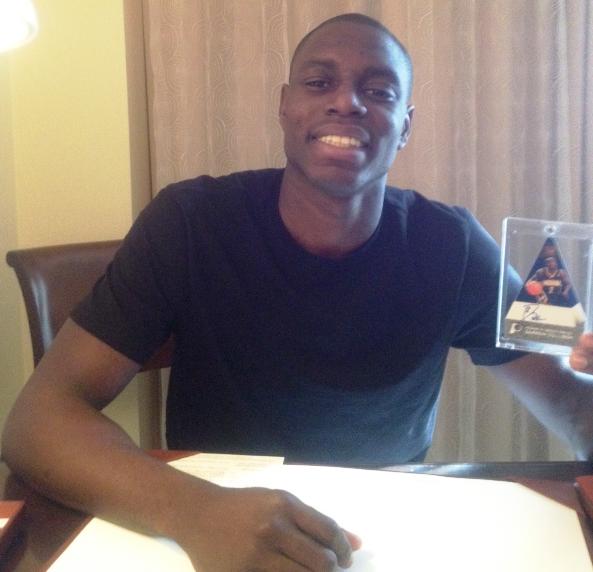 Darren Collison
Darren loves reality shows, so as soon as I walked in he said, ‘Have we meet before?’ I had to laugh and say, ‘No, we haven’t, but you may have seen me a few times.’ We started to chat about all the shows he watches and likes. He said he had a lot more time on his hands two years ago but now that he is playing a lot of minutes and they are winning, he only catches recaps. Of all the shows he mentioned, he said ‘Basketball Wives’ was a favorite for laughs. He said if he had a wife, there’s no way she could be on ‘Basketball Wives.’ He said during his first year in the NBA he ate badly. Really badly. Hot wings, burgers, fries; essentially anything he wanted. Now he’s doing better — pasta , baked chicken and other healthier choices. He said he listens to a mixture of songs from Lil Wayne, Meek Mill and Rick Ross, but he adds in R&B because he gets tired of guys screaming at him. 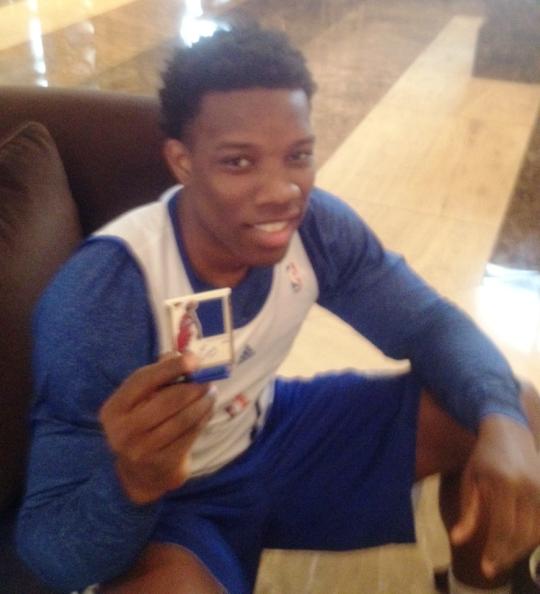 Eric Bledsoe
The Clippers are a fun team. They have at least five guys on the team who have deals with Panini America, so whenever they see me the guys are like, ‘Are you here for me? How many do I need to sign? Let me get this money.’ My partner in crime from Panini Authentic, Brian Bayne, took a trip to Los Angeles last month to secure Blake Griffin and our newest signee, Chris Paul. When the team came in to Dallas the only player I needed to see was Bledsoe. Eric is used to having so many autographs to sign, so when he realized he had a relatively small amount to catch up on, he sat down immediately and said, ‘Let’s do it.’ I actually joked with him that it was a good thing he had on his practice jersey on because I wouldn’t have recognized him with his hair grown out. He loves that the team is playing well and they’re now the hottest team in Los Angeles. Several of his teammates stopped by and asked for deals on the spot, saying they would be the quickest signers I’ve ever had. What’s so funny is that they all say that, then when the cards come they take their time getting them back. The best part of our signing session is we now have a very clear understanding. When Eric sees Panini America boxes of cards he will sign them immediately and get them back. I told him I was going  hold him to that since he won’t have nearly as many now.” 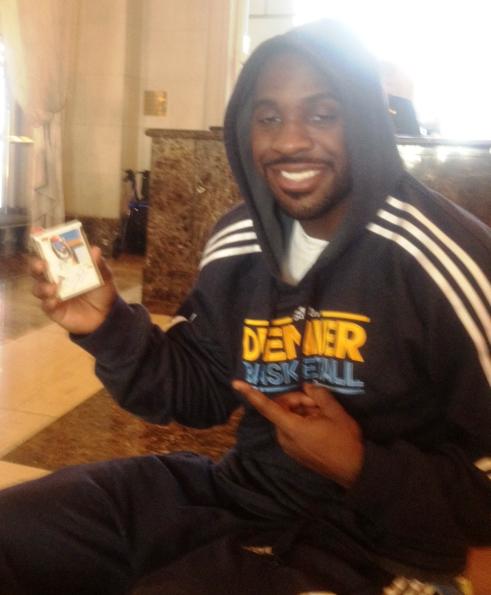 Ty Lawson
Ty was looking for me! That’s a first. He said the Nuggets were very tired at the moment. They had played at home the night before and didn’t get into Dallas until around 2:30 in the morning. He said this season has been mad crazy with all of the traveling so it’s a good thing I met him today or I would have never gotten these cards back. He loved the way his Silouhettes Prime card looked and actually asked if he could keep it. He breezed through signing all of his cards but when I pulled out the stickers he just groaned. I asked him why he didn’t like to sign stickers and he said the box was too small. On his card he had a head band on and I asked him how long he’s been wearing it. He said, ‘Since high school.’ After each game, even on the road, he throws it in the crowd so a fan can have it. He said he’s graduated from hot wings to pasta. But he did say that if hot wings, fries or McDonald’s is ever an option, he’d definitely take it into consideration. He listens to Lil Wayne to get hyped before a game and said he felt like Nikki Minaj lost her mind at the Grammys. I asked to rank the worst cities in the league and his choices surprised me. He went Utah, Sacramento and Minnesota. He said there’s nothing — absolutely nothing — to do in any of those cities.” 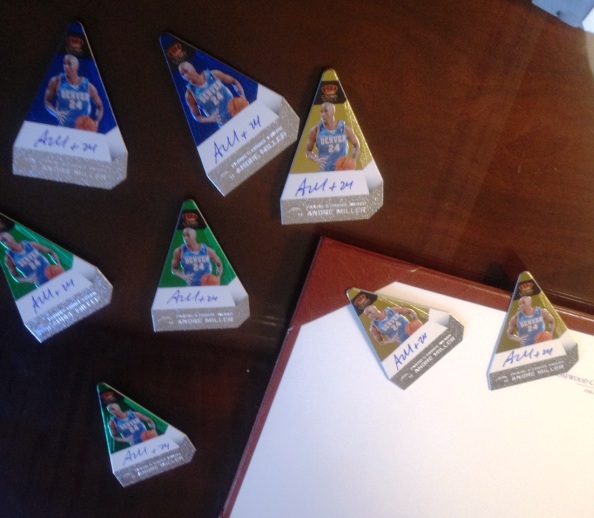 Andre Miller
This was an interesting signing. The team didn’t get in until very late and had breakfast at 11 a.m. Since there wasn’t a shoot around after that, the players just normally go up to their room and go back to sleep. This is exactly what Andre did. His agent called him several times and Ty went  and knocked on his door but got no answer. At this point, the cards are not getting signed. This is the part of the on-card signings that’s not fun: Waiting. I finished up with Ty at around 1:30 p.m., Andre’s agent called me at 3 p.m. to say that he’s not answering and he suggested I leave. The dilemma, of course, is that if I would’ve left, I wouldn’t have gotten these cards signed, so I decide to go grab lunch and come back at around 4:30 because the team would start getting on the bus at 5:15. As soon as I ordered my food, Andre’s agent called to say that he just got my message and that I should go back to the hotel to see him. When I got there he was apologetic. The first thing the players always say is, ‘I didn’t know you were even coming.’ We start signing and Sportscenter is on, so I asked him about Jeremy Lin. Andre said that it was great that Lin was in a system with Mike D’Antoni because Mike is used to having a guard run his floor. He also said that Amar’e will not have a problem because he played with Nash under Mike’s coaching and he knows what it means to allow your point guard to distribute the ball. I then asked about Carmelo Anthony and he said, ‘I’m not going to touch that. Been there, done that. But when your only concern is scoring and seeing how many points you can get. . . .’ The best part of the signing with Andre is that when it came time to take a picture he said, ‘Now how are you gong to play me like that. I just woke up to sign these cards. You can’t put me on looking this way!’ 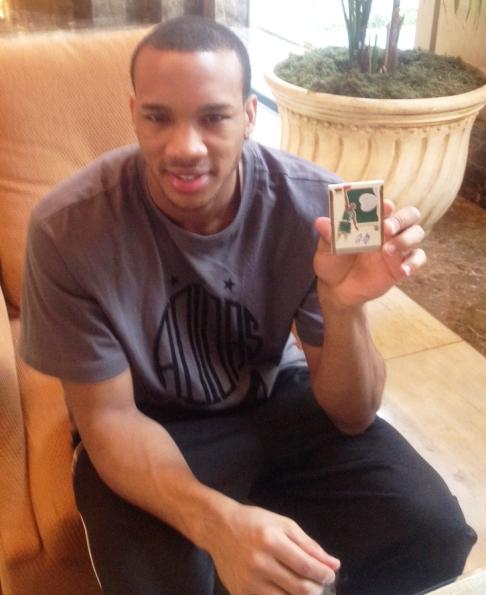 Avery Bradley
“You never realize how many guys you have deals with on the same team until after they come out of their team meeting and they all ask you about cards. Boston is definitely one of those teams. Panini America has deals with at least six players on that squad and the only one I needed to see on this day was Avery Bradley. He was supposed to sign before his team meeting but came down too late for that, so he took his stickers in the meeting with him. I raised an eye brow at that but he said, ‘Hey I’ll sit in the back and sign.’ He did just that. Afterwards we sat and he signed his Preferred cards, which he thought were hot. When talking about the cards I told him how much the pack costs and he was surprised to see people spending that type of money on cards. I told him that if you pulled a Bill Russell or a Larry Bird autographed card, then that card could usually pay for an entire other box as well. I’m glad to say that he’s more into pasta than hot wings and fries for his pregame meal. He also said he doesn’t listen to Lil Wayne to get him ready for a game, either. Actually, he thinks he’s kinda wack. On rotation on his iPhone are Jeezy and Drake. Interesting fact: Like so many other guys in the league, he loves coming back to Dallas to play (he attended elementary school and junior high in the DFW area) and for this particular game, he had to get a dozen tickets for his family and friends to watch.”