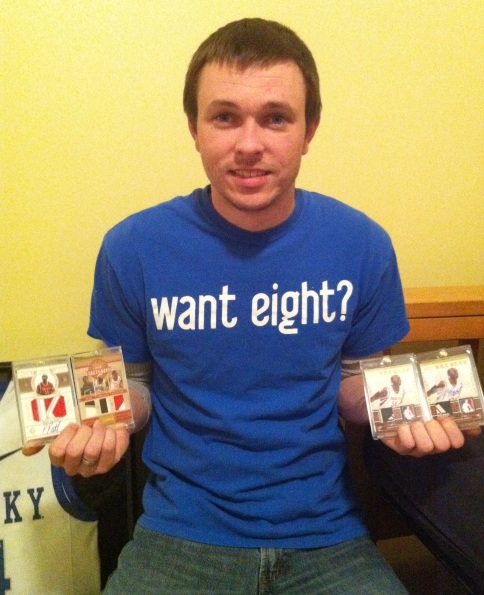 Kentucky native Daniel Taylor has lived the dream of most collectors. He's not only met the subject of his collecting pursuits (former University of Kentucky superstar Patrick Patterson) but he's also had the opportunity to share his collection with Patterson, too.

Kentucky native Daniel Taylor has lived the dream of most collectors. He’s not only met the subject of his collecting pursuits (former University of Kentucky superstar Patrick Patterson) but he’s also had the opportunity to share his collection with Patterson, too.
Indeed, collecting in Lexington, Ky., has its advantages — especially when a local hero like Patterson returns home for a public signing. What follows is Taylor’s tale, in his own words.

Panini America Personal Collection Spotlight
Who: Daniel Taylor, Lexington, Ky.
What: Houston Rockets big man– and former University of Kentucky star — Patrick Patterson
“As you can tell, Patrick Patterson is my PC and my favorite player, aside from His Airness. I live in Lexington, Ky., which is the capitol of Big Blue Nation, so I was able to see Patt play all the time. He is an all-around great person. He stayed in school, graduated early and is a great basketball player. That’s the kind of role model I believe we all need and I will always see him as my favorite player.
“I got back into collecting during the summer of the 2010-11 NBA Draft class so it just made since to collect my favorite player. I have meet him Patterson times now so far, and the last time was by far the greatest moment in my collecting/sports history.
“My LCS holds autograph sessions all the time with past Kentucky basketball players, and after bugging the owner to bring in Patt, it finally happened. I was pretty excited about this one, as I would finally be able to get my jersey signed by him. A couple of days before the signing, the owner suggested that I bring in my PC, because Patt’s mother should see it. Little did I know that friends of Patt’s mom had told her about my collection. So I arrived early with my PC in hand, ready for him to show up.
“The owner then asked if I could help with the session, and for me to sit next to Patt and make sure people only got signed what they paid for. So for two hours I was able to sit next to Patt, ask questions, joke around and just BS with him. His mom was amazed by how many different cards of him I have, which was just icing on the cake. She asked me if I would sell her any, and my response was, ‘no amount of money would get this out of my hands.’ Patrick also looked through my collection and talked about a few of the cards with me. Overall, my best collecting experience yet.
“I will do anything within my means to have one of each card produced of Patrick Patterson.”