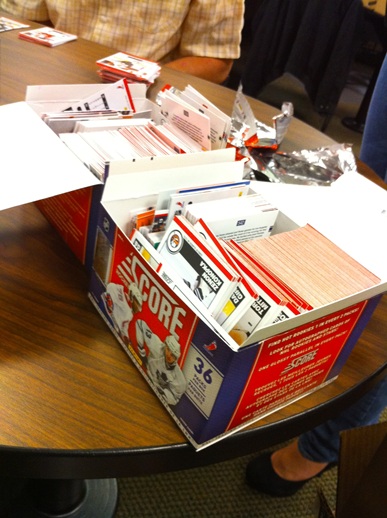 It's a busy time of year at Panini Amierca headquarters, what with last week's release of 2010-11 Certified Hockey and the release of 2010 Absolute Memorabilia Football less than two weeks ago. And then there's 2010 Crown Royale Football and 2010-11 Score Hockey, both of which are, as we type this, being printed and prepped for release this week.

It’s a busy time of year at Panini America headquarters, what with last week’s release of 2010-11 Certified Hockey and the release of 2010 Absolute Memorabilia Football less than two weeks ago. Of course, then there’s 2010 Crown Royale Football and 2010-11 Score Hockey, both of which are, as I type this, being printed and prepped for release this week.

That long-winded lead-in really is just another way of saying this: We’re going to be conducting a lot of quality control checks at the Panini America corporate office in the coming weeks. Late last week, the product being checked was the highly anticipated 2010-11 Score Hockey.

So, what constitutes a proper quality control check? Glad you asked.

Essentially, a quality QC check is the best last chance to make sure a product is delivering what it’s supposed to deliver, on average. It usually takes place just after packout begins, with the expeditious delivery of a few early cases to the office (occasionally, quality control takes place on location at the printing facility).

Once the QC cases arrive (with boxes that are not cello-wrapped, by the way), members of that product’s development, prepress, design and production teams bum rush the shipment to begin carefully opening packs, making precise notes about what they pull, when and from what box. It’s something akin to a dress rehearsal, only with a lot more Mylar.

All the while, mind you, the presses at the printing facility continue to run. If the QC process reveals anything other than what the product’s fact sheet calls for (too many of this insert, not enough of that one, this particular parallel appears to be damaged every time, memorabilia cards aren’t falling at the right frequency), the production manager is on the phone with the print vendor tweaking drop rates, troubleshooting solutions and generally rectifying things.

Once the QC cases are exhausted, all the cards (having been handled with kid gloves the whole time) are gathered up and promptly returned to the vendor where they’re reintroduced to the packout process.

Perhaps you knew all of that already. Hopefully, you learned something new. Either way, please enjoy the following photo gallery from the 2010-11 Score Hockey quality-control process.