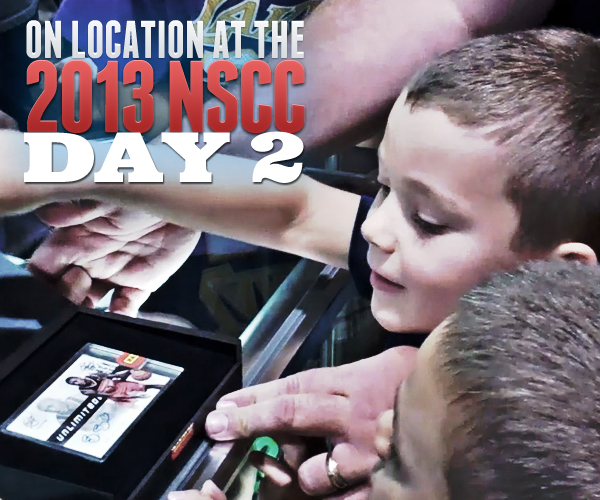 ROSEMONT, Ill. -- For Alan Schipper, his visit to the Panini America booth on Thursday, the second day of the 34th Annual National Sports Collectors Convention, could be summed up in two words: "Andrew Luck."

ROSEMONT, Ill. — For Alan Schipper, his visit to the Panini America booth on Thursday, the second day of the 34th Annual National Sports Collectors Convention, could be summed up in two words: “Andrew Luck.”

Schipper, visiting the show from San Diego, was one of the many collectors taking advantage of Panini America’s Redemption Trade-Up program, where old, unfilled redemptions can be swapped on the spot. Schipper said he had been waiting on seven such cards for a year-and-a-half. His reward turned out to be luck, indeed — a 2013 Score Football Inscriptions autograph of the Indianapolis Colts star quarterback.

“Made my day,” Schipper said. “It’s the best experience to get greater value.”

“I say it’s bold, but it’s a very engaging thing for us to do,” Kazmierczak explained. “We have brought our customer service department head man, David Sharp, out here. He’s doing live redemptions. For those folks who have waited a long time for a particular player, we’re giving you the option to trade up. David’s brought an arsenal of our inventory.”

To participate in the Trade-Up, collectors are asked to bring a print out of their open redemption requests that are four months old or older to the Panini America booth.

Thursday also marked the first full day of the company’s wildly popular wrapper redemptions, as well as the debut of Box Wars and live case breaks from some of the top breakers in the industry. Panini America fans once again scored big with redemption hits such as towel and glove cards. Friends P.J. Clark and Max Feinstein, both from North Port, N.Y., went straight to the Panini America booth after arriving for their first National purely for those shiny silver packs. Within minutes, they were showing off the memorabilia cards they hit.

“You can really pull some great stuff,” 13-year-old Feinstein said.

A short time later, Lonnie Minshall and his two sons were crowned the first winners of this year’s Box Wars when they pulled a serial-numbered Calvin Johnson from 2013 Elite Football. Their reward was an always-intriguing Panini Black Box that included a 1/1 Bradley Beal patch autograph, as well as a special pack of 2012-13 Select Basketball Green Prizms that included a rare Kyrie Irving card. The Minshall boys, 5-year-old Logan and 7-year-old Ryan, offered big smiles as they posed with the cards.

Live case breaks began with online breakers pulling up a table in one corner of the Panini America booth to broadcast to their followers. We’ll have more tomorrow on just how much Panini America has embraced this popular, and growing, aspect of the hobby.

You can check out all of Thursday’s highlights in the images and video below — and stay tuned to The Knight’s Lance for continued coverage from the 2013 National Sports Collectors Convention.