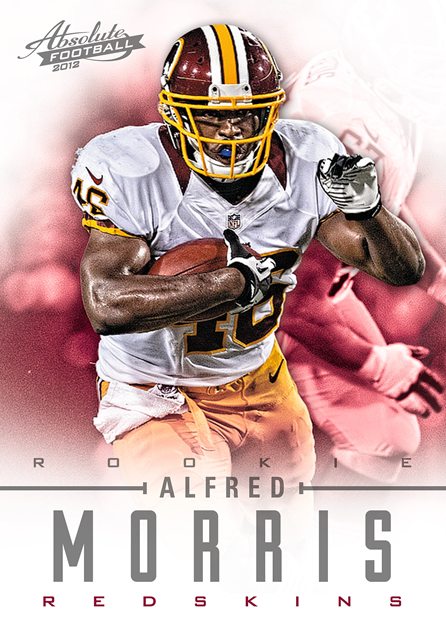 Long before Washington Redskins rookie running back Alfred Morris was a deep, deep sleeper in your August fantasy football drafts or the hot waiver-wire pickup just a few weeks later, he was already a permanent fixture in Panini America's 2012 NFL lineup.

Long before Washington Redskins rookie running back Alfred Morris was a deep, deep fantasy sleeper in August or the hot waiver-wire pickup just a few weeks later, he was already a permanent fixture in Panini America’s 2012 NFL lineup.

Indeed, there was a reason that Panini America officials included Morris’ first Rookie Cards and autographs in the June release of 2012 Prestige Football. It’s the same reason Morris has appeared in every Panini America product since: The kid from Florida Atlantic can flat-out play.

In fact, Morris has been every bit as impressive to start his NFL career as the celebrated Heisman Trophy-winning rookie he shares a backfield with. Through Week 4, Morris leads all rookies with 376 rushing yards (and trails Marshawn Lynch by just 47 yards for the league lead), and has scored four touchdowns.

To date, Panini America is the only officially licensed NFL trading card manufacturer to produce Rookie Cards and autographs of Morris, who has appeared on both in Prestige, 2012 Score, 2012 Elite, 2012 Rookies & Stars, 2012 Momentum and 2012 Prominence.

“It’s been incredible to see how quickly Morris has picked up the NFL game. He makes moves that you wouldn’t expect for a bigger back. We’re excited to have him in our sets and we can’t wait to see what he does next.”

To that end, Morris is scheduled to appear in each of Panini America’s NFL products for the rest of the season. His first cards featuring game-action photography will arrive in 2012 Gridiron Football and 2012 Absolute Football, both of which are previewed below.