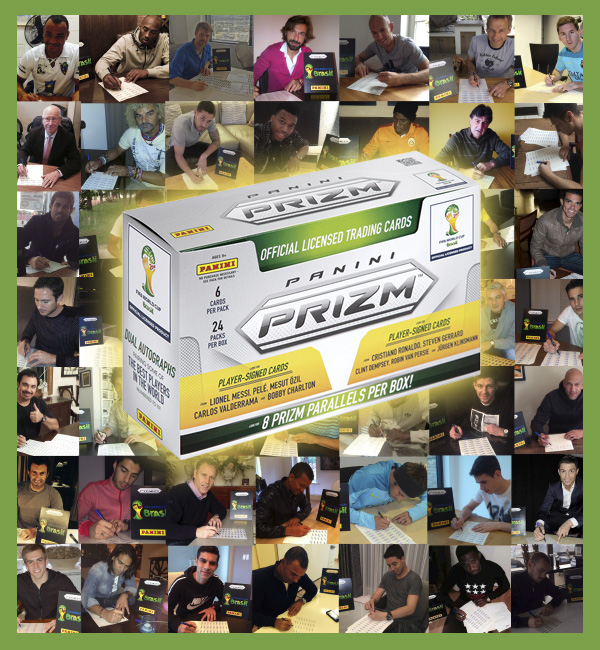 The road to creating a first-of-its-kind trading card product like Panini America’s 2014 FIFA World Cup Brazil™ Prizm, much like the road to the 2014 FIFA World Cup Brazil™ itself, can be a long, arduous journey. The results once you get there, however, are every bit as spectacular.
When Panini America officials set out last summer to build a trading card set that combined the collecting world’s most popular technology (Prizm) with the world’s most popular sporting event, they aspired to craft the single greatest autograph checklist in the history of soccer trading cards. When the 50th and final soccer superstar — Roberto Carlos — returned his autographs last week, that once-improbable mission became a blissful reality, resulting in a 100-percent, redemption-free product.

A project that began in earnest last July was finally completed almost nine months later. And as you’ll see in the revealing gallery that follows, a lot can happen in nine months.
“Setting the goal of zero redemptions early on was definitely nerve-racking,” said Alex Carbajal, Panini America’s Licensing Acquisitions Manager for the Prizm World Cup set. “A lot of time was spent communicating and planning the logistics with return shipments and answering questions regarding the signings. The international time zones didn’t always gel with ours, so answering the phone in the wee hours of the morning from a foreign number became a common practice.”
So did anxiously scouring incoming parcels for the gradually arriving autographs of World Cup legends. The first four signers to return autographs — Frank Lampard, Frank Rijkaard, Marco Van Basten and Roberto Baggio — did so on the same day in early December. The aforementioned Carlos returned his last Thursday from all the way in Turkey and just in time to make packout.
In between, Panini America HQ was a destination of special deliveries from some of the greatest soccer superstars of all time including Pelé, Lionel Messi, Cristiano Ronaldo, Franz Beckenbauer, Jürgen Klinsmann, Neymar, Clint Dempsey, Bobby Charlton and many more.
“I was surprised to hear how many players collected the FIFA World Cup™ stickers in the past,” Carbajal said. “There were many fond memories from the players. So the ‘Panini’ name really brought back fun memories of them collecting or seeing their first sticker as a player.”
Below, we’ve provided a gallery of signature moments — literally — from the globetrotting signing sessions required to create the 2014 FIFA World Cup Brazil™ Prizm set. For soccer fans and collectors who’ve been asking since day one who signed for the set, your answers await.
Stay tuned to The Knight’s Lance tomorrow a world-premiere unveiling of the autographed cards themselves. You can pre-order 2014 FIFA Wold Cup Brazil™ Prizm now at iCollectPanini.com. The product goes live in the U.S. on May 7.