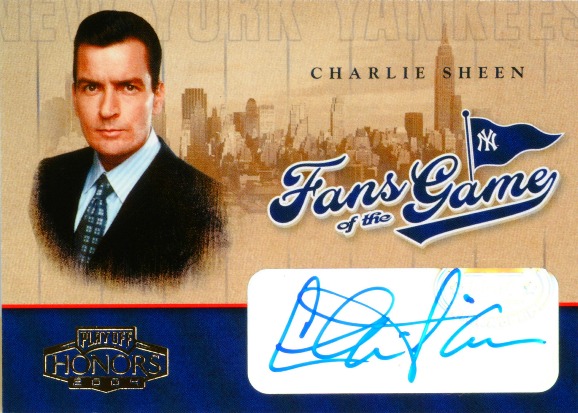 The most recent barrage of solid-gold sound bytes from the "Wild Thing" known as Charlie Sheen got me to thinking earlier today, naturally, about Sheen's most valuable trading card, an autographed Fans of the Game beauty originally inserted into packs of 2004 Playoff Honors Baseball.

The most recent barrage of solid-gold sound bytes from the “Wild Thing” known as Charlie Sheen got me to thinking earlier today, naturally, about Sheen’s most valuable trading card, an autographed Fans of the Game beauty originally inserted into packs of 2004 Playoff Honors Baseball.

After all, one of the myriad enduring qualities inherent with any sports card is its innate ability to, more often than not, accurately portray the Q rating and public-acceptance level of the personality on it.

When a star athlete loses his way along the path to greatness (or even goodness), the inevitable fallout has a mostly lingering — but sometimes long-lasting — impact on the values of that player’s trading cards (see Michael Vick, Roger Clemens and Tiger Woods for recent examples of this phenomenon). But does that same pattern hold true for sports cards depicting actors? In other words, does the current economic climate surrounding Sheen’s card suggest that the mercurial “Two and a Half Men” star is in a tailspin? Good question.

Beckett Media currently values the card, which is limited to just 250 copies, at between $50 and $100, and that range was stable back when it appeared that Sheen was as well. Lately, though, it seems that collectors of that card — many of whom paid more than $120 for their copy back in 2004 — are giving it the collective cold shoulder.

“We haven’t tracked a single sale of that card since November, and that was for $55,” says Brian Fleischer, a Senior Market Analyst for Beckett Media. “Our last confirmed sale prior to that was for $80 in 2008.”

Two sales in the last two years? That’s hard to fathom for the talented, outspoken actor who, admittedly, is not completely drug free just yet.

“I’m on a drug,” Sheen recently told ABC News. “It’s called ‘Charlie Sheen.’ It’s not available because if you try it you will die. Your face will melt off and your children will weep over your exploded body.”

In any event, perhaps all those diehard Sheen collectors who wanted a copy of the card got one seven years ago and tucked them securely away in their private collections (by the way, now is not the time to sell). Perhaps, with just 250 cards in existence, the card is simply too scarce to surface on the open market with any frequency. Or, just perhaps, Sheen has alienated himself not only from the higher-ups at CBS but also from an increasingly indifferent base of collectors.

Whatever the reason, it’s clear that Sheen’s once-coveted autographed baseball card, like the man himself in recent weeks, has lost quite a bit of luster.

6 Replies to “So . . . What Happens to the Value of that Charlie Sheen Baseball Card Now?”