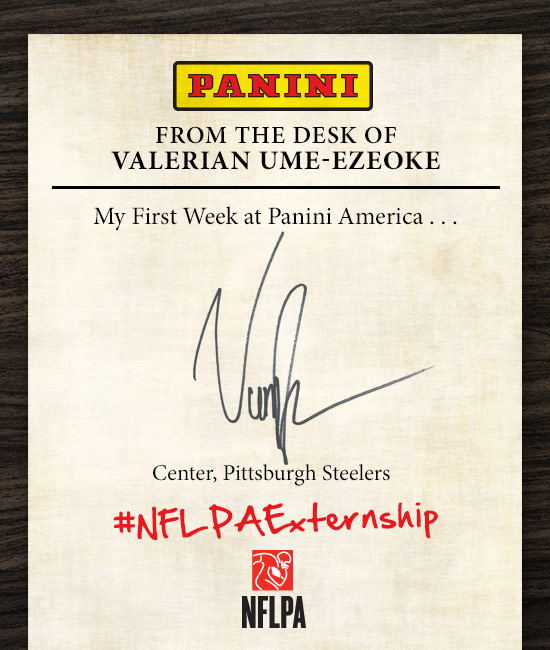 Editor’s Note: As part of the NFLPA Externship program, Pittsburgh Steelers center Valerian Ume-Ezeoke is spending three weeks at Panini America working in the Production, Prepress, Product Development, Acquisitions and Marketing departments. Each Friday during his externship, Ume-Ezeoke will document his time inside Panini America HQ. This is his first dispatch.

Editor’s Note: As part of the NFLPA Externship program, Pittsburgh Steelers center Valerian Ume-Ezeoke is spending three weeks at Panini America working in the Production, Prepress, Product Development, Acquisitions and Marketing departments. Each Friday during his externship, Ume-Ezeoke will document his time inside Panini America HQ. This is his first dispatch.

Playing in the NFL, you never think about the production of trading cards and sports products. Your sole focus is to be the best on the field so learning about the components of collectible items and sportswear wasn’t my main focus. But when the opportunity was presented by the NFLPA Externship program to extern with Panini America, their exclusive trading card partner during the offseason, I jumped on it without any hesitation. I chose Panini America because I knew they were one of the leading licensing partners of the NFLPA – plus, I always see their logo everywhere.

I wanted to get a chance to see what has kept Panini America thriving for so long in one of the most challenging industries out there. I’ve always wanted to gain knowledge about manufacturing, production and marketing — so where better to learn these things than at one of the largest sports and entertainment collectibles companies in the world? 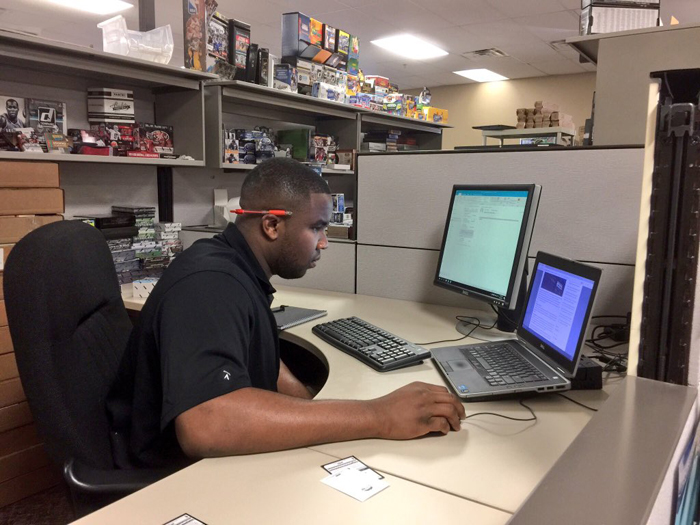 Day 1
Tuesday, February 21
My first day on the job was one to remember. When I first walked into Panini America’s headquarters, I was met by Tracy Hackler and Scott Prusha from the company’s Marketing department. Tracy and I have been in contact the past couple of weeks because he was a big part of getting my Externship set up. Once me and Tracy caught up, he then introduced me to different staff members — including VP of Production Stephanie Carlson and Director of Production Carlos Torrez. The reason I said my first day on the job was one to remember is because literally five minutes into my externship I was thrown into a production meeting with the mangers of the company. It kind of reminded me of being on the football field because at any time your number can be called and mine was called five minutes into my first day. Sitting in the production meeting amazed me. Seeing staff members bouncing ideas off each other and following up with responses and solutions was cool. I enjoyed observing the dialogues that went on in the room — even though I didn’t understand most of the production terminology that was being used. After the meeting, I finally got a chance to catch up with the VP of Marketing, Jason Howarth. We talked about some of the things I get to look forward to during my time here. I then got to meet Panini America CEO Mark Warsop and CFO Shelby Lee. What’s great about Panini America is the family oriented atmosphere. Everyone accepts you with open arms; they treat you like you’re their very own. 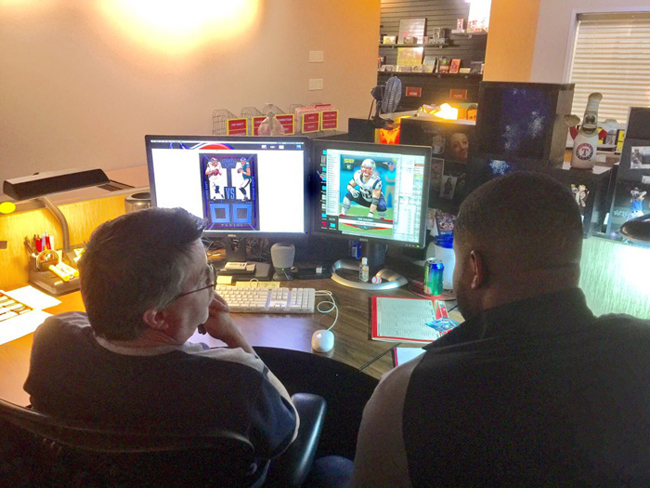 Day 2
Wednesday, February 22
My second day started off once again with a production meeting. I got a chance to see some of the newest products that the company is coming out with. The designs and schemes of the newer products that are going to be released are astonishing; I see why consumers love Panini America’s products. Today I got a more in-depth education of the configuration of how cards and products are made. I got a chance to soak in some invaluable knowledge from Torrez. He talked about what goes into the process of creating and manufacturing products. I learned about different colors and substrates that are used in creating cards. I also learned about the different foils and backgrounds that are used in the products. I even got a chance to sit in one of the vendor meetings with Torrez. I never knew so much went into creating cards. The amount of information I gained between learning from Torrez and production mangers Jeremy Johnson and Dan O’Connell was extremely beneficial. 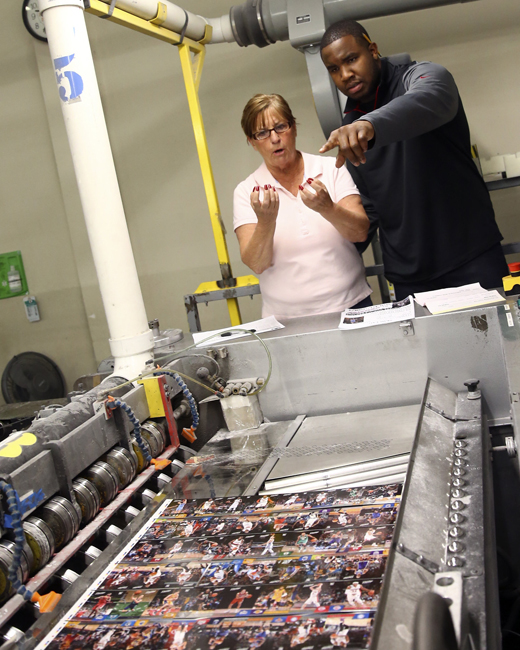 Day 3
Thursday, February 23
My third day was spent mostly at the Panini America production facility across town. I was met by Carlson, who gave me and a few other Panini America employees a fascinating tour of the manufacturing facility. I couldn’t believe my eyes on what went into producing the company’s product. The amount of discrete attention that each card needs when being produced is what really got me. Everything was so organized and in sync. All the workers there were focused on one goal: To create the best products for consumers. I got to see different manufacturing machines . . . I never knew they were so big! Carlson gave us the ins and outs of the facility. She was extremely knowledgeable and answered every question that I had. I left the facility with more knowledge than I could have ever imagined about production. 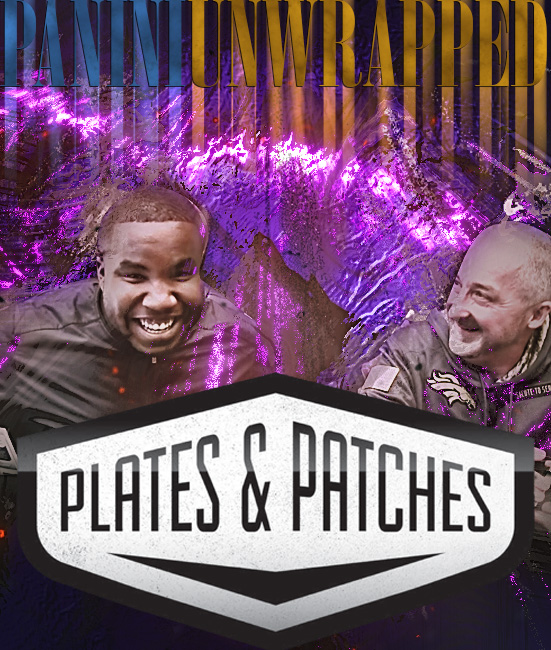 Day 4
Friday, February 24
Today I got to film an episode of Panini Unwrapped with Hackler starring the company’s new 2016 Plates & Patches Football product. You can check out my Panini Unwrapped debut below. It’s must-see stuff. We talked about my busy first week at Panini America and I even got to reveal a little secret. I am excited and can’t wait for you guys to watch it. This week has been spent mostly with manufacturing and production so next week will be more with product development, acquisitions and marketing. I also get to travel to the 2017 NFL Scouting Combine next week with members of the acquisitions and marketing teams –- so I can’t wait to write about that. I hope you guys enjoyed my first-week recap and I hope to see you all next week.