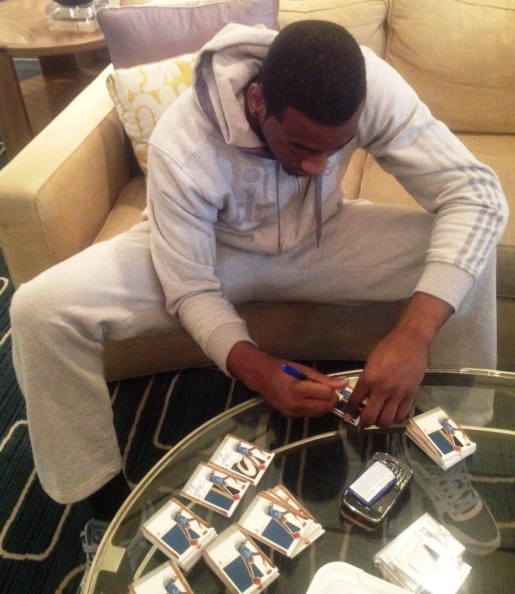 Panini America NBA acquisitions specialist Ivory Tabb has been a busy lady as of late, trotting the globe from one NBA city to the next, doggedly pursuing -- and securing -- on-card autographs from the best players in the league for the upcoming 2011 Preferred Basketball release.

Panini America NBA acquisitions specialist Ivory Tabb has been a busy lady as of late, trotting the globe from one NBA city to the next, doggedly pursuing — and securing — on-card autographs from the best players in the league for the upcoming 2011 Preferred Basketball release.

Her results over the last two weeks have been nothing short of remarkable, highlighted by sit-down signings with the likes of Derrick Rose, John Wall, Kevin Durant (with an assist from Panini Authentic’s Brian Bayne), Kevin Love, Brandon Jennings and many more. Luckily for all of us, Tabb has taken notes — and pictures — during her journey.

To be sure, Tabb is committed to the cause and is not one to take “no” for an answer, which means redemptions will be down and more road-trip tales will be forthcoming. But for now, enjoy the following anecdotes and images from the mind — and iPhone camera — of Tabb.

Grant Hill
“Grant Hill was great. I asked him how many more years he had left to play he said two physically but didn’t know  mentally how long. He had knee surgery in July and said that helped a great deal. He said he didn’t start running until November so there was no wear and tear on it and the rest helped out a great deal. He said this particular trip to Dallas was great because the Suns got here on a Saturday afternoon and had a full day of rest before they played the Mavericks. He said the restaurants were great, particularly Truluck’s and Nobu. His pregame meal is usually something healthy off of  the room-service menu and he couldn’t imagine at his age [ he will be 40 this year] eating wings and fries before a game. He said he would pass out.”

Brandon Jennings
“I had my first speeding ticket that day trying to get to this signing. Brandon said he has had a few but not in Dallas. He hit the nail straight on the head when guessing how much my fine would be based on how fast I was going. His pregame meal is hot wings and fries, which Stephen Jackson says is a bad combo but that all the young guys do it.”

Stephen Jackson
“Stephen Jackson was great. He was very excited about the cards and asked to keep a few. He said the design team did a great job and it was unlike anything he had ever seen. He has a mixed tape out called ‘What’s a Lockout’ and he received 7 million views on World Star Hip Hop in two days. Stephen also said that not only was Derrick Rose the best point guard in the league, but that he might be the best player as well. As for Jennings’ pregame meal, Stephen says all the young guys have strong guts now and they eat bad. But he said just wait until they get older. They won’t do it any more.”

DeMarcus Cousins
“DeMarcus was great. He was on-time, he signed everything quickly and he even brought me lunch afterward from Morton’s. He opted to go with the steak even though he really wished he could have lemon pepper wings and crab legs. He said he’s trying to watch what he eats but wings are the meal of champs.”

Luol Deng
“I met with Luol Deng  in Cleveland before a game against the Cavs. There was snow on the ground so the team bus broke down and got stuck in the snow. The team’s staff was on the other bus and were forced to switch with the players. Luol said he tried to tell them to let the staff get on the player bus but apparently no one heard him. He said he felt bad for the woman on the other bus, which lead to me asking about woman referees. He said that they weren’t bad at all and he hardly notices them. But when they do make a bad call he doesn’t talk to them they way he would talk to male refs. His pregame meal is whatever the team serves.”

Derrick Rose
“Derrick was surprised I traveled all the way to Cleveland to see him. Rip Hamilton, who is a good friend of mine, actually brought him over. He thought the Silhouettes prime cards were great. He tried to keep one but I told him there was a limited number of those and that I would send him something else. He was very excited about finally feeling ‘OK’ since he hadn’t played in two games due to his injury. I told him I would be mad I’d he didn’t play, since I came all the way from warm Dallas to see him. He said he was going to have a great game just for me if he got in. He said his pregame meal is sleep.”

Luke Harangody
“Luke was very excited about his cards. He really liked the Crown Royale cards. He asked if it was a new design because he didn’t remember cards looking like that when he collected. He said during the lockout he was back at home cleaning out his mom’s garage and found his old cards. He said he has an autographed Derek Jeter Rookie Card that’s got to be worth something. He said he would text me a picture of it so I could tell him how much it’s worth. He used to be a heavy collector growing up. His pregame meal is pasta and he said he can’t mess with the wings and that he sees plenty of guys who eat junk right before game time.”

23 Replies to “Tales from the Road: The Endless Pursuit of 2011 Preferred Basketball Autographs”