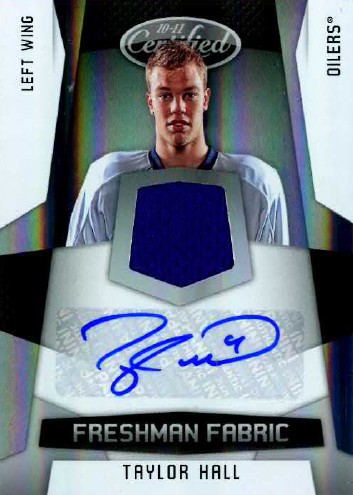 The quick timeline of the most meaningful accomplishments in the young NHL career of Taylor Hall goes a little something like this:

The quick timeline of the most meaningful accomplishments in the young NHL career of Taylor Hall goes a little something like this:

Hall is one six future superstars – along with Tyler Seguin, Brayden Schenn, Jeff Skinner and Oilers teammates Eberle and Paajarvi – who made their NHL debuts in early October and, as a result, will appear on their first Rookie Cards with the launch of Certified Hockey next week.

“There was a lot of anxiety among the collecting community when we announced that we were moving the Certified release date,” says Al Muir, Panini America’s Hockey Brand Manager. “But it was a calculated decision we felt was worth the risk. Not only did the benefit of extra time allow us to get additional top-flight autograph content into the product, it afforded us the opportunity to produce the first Rookie Cards of the NHL’s next wave of superstars.”

Panini America is putting its best possible skated-foot forward with its celebrated return to hockey. Certified, which began packing out today, will deliver four autograph or memorabilia cards per 10-pack box (including at least one autograph guaranteed).