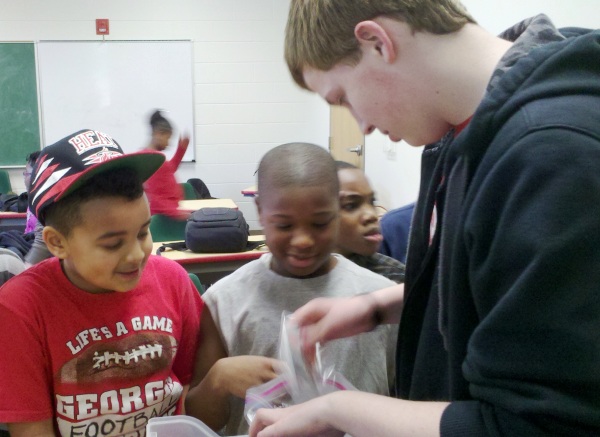 It started, simply enough, as a way for 15-year-old collector Mitchell Kennedy to streamline his sports card collection. In the four months since, Kennedy’s housecleaning efforts have blossomed into a full-blown feel-good story that has introduced the joys of sports card collecting to kids across North Carolina.
“I had some extra cards and told my mom to give them to someone she knew that did not have a lot,” Kennedy says. “She told me one day that the child that got them still had one of the cards by his bedside. So I thought that I could make this a big thing and give cards to a lot of kids.”

And with that, Kennedy’s Sports Cards for Kids charity began. Since November, the high school freshman has donated more than 12,000 cards to local Boys & Girls Clubs and children’s hospitals, no doubt developing countless new collectors and delivering untold bright spots into the lives of kids who need them.
Just days before Kennedy paid a visit to the kids at Levine Children’s Hospital in Charlotte, N.C., two weeks ago, he received confirmation from the North Carolina Secretary of State recognizing Sports Cards for Kids as an official 501 (c) (3) charity.
“I give cards to kids who can’t afford them or who are going through hard times, and I do it because it makes them very happy and excited,” Kennedy says.
Kennedy’s myriad inspirational efforts — including monthly visits to Boys & Girls Clubs and trips to Brenner Children’s Hospital and The Children’s Home of Winston-Salem — have attracted the attention of local media and local athletes.
Carolina Panthers such as Armanti Edwards and Thomas Keiser have signed autographed cards for Kennedy to use in his hand-collated goodwill gift bags that typically include 20 mostly basketball and football cards (five superstars, 14 new cards and one legend). On most trips, Kennedy will distribute 100 special packs.
For those counting at home, that’s at least 2,000 cards per month. At that rate, and with plans for expansion to additional children’s hospitals, Kennedy’s current supply of cards won’t last long. That’s where loyal Panini America collectors can pitch in with donations to Sports Cards for Kids.
Kennedy is always accepting card donations for the cause, preferably from 2005 or later as those names are most recognizable to the kids on the receiving end.
If you’re interested in donating to the Sports Cards for Kids cause, you can mail donations to:
Sports Cards for Kids
6255 Towncenter Drive #621
Clemmons, N.C. 27012
Good job, Mitchell. Keep up the good work and please keep us posted on your progress.