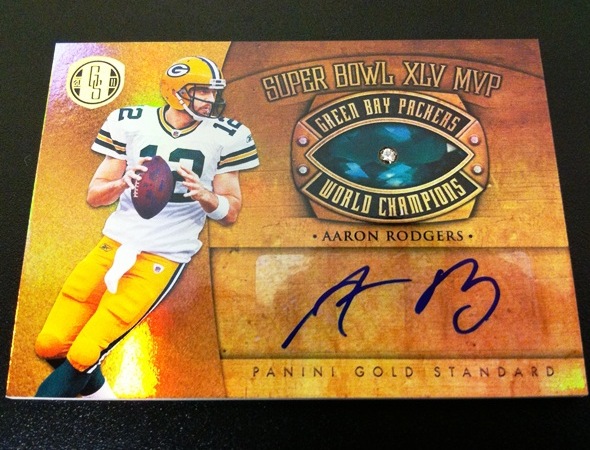 Traditionally speaking, sports trading card production during the last 100 years or so has required seemingly endless supplies of two fundamental materials: Ink and paper. But true to form, Panini America is once again about to throw tradition on its head by incorporating two more precious materials: Diamonds and gold.

Traditionally speaking, sports trading card production during the last 100 years or so has required — almost exclusively — two fundamental resources: Ink and paper. Leave it to Panini America to throw tradition for a loop by introducing two more precious materials to the manufacturing mix: Diamonds and gold.

Indeed, when the company’s new 2011 Gold Standard Football set releases to the masses later this week (in packaging designed to resemble gold bars, no less), it will include a limited number of special trading cards embedded with real diamonds and pieces of real 14-karat gold.

And those fans lucky enough to uncover the hidden gems will realize collecting’s equivalent of winning a Super Bowl ring.

In all, there are 50 cards in Gold Standard embedded with diamonds, including 30 Super Bowl Rings Signatures (five each autographed by former Super Bowl MVPs Troy Aikman, John Elway, Aaron Rodgers, Terry Bradshaw and Tom Brady). In addition, there are 20 Super Bowl Rings cards that pay tribute to the Dallas Cowboys, Pittsburgh Steelers, San Francisco 49ers and Green Bay Packers dynasties that include . . . wait for it, wait for it . . . one diamond honoring each Super Bowl championship.

Each of the 132 full-cut diamonds used in Gold Standard weighs approximately 1/10th of a carat, boasts clarity of SI2 or better and color of “I” or better. And according to Jeff Bertman, owner of Rogers Jewelry in Quincy, Mass, each diamond also carries an approximate retail value of $120. Combine that with the overall scarcity of the cards themselves and the individual player autographs on them and you have a collection of cards that, quite literally, could be worth more than their weight in, well, diamonds – or gold.

2011 Gold Standard Football will live up to its name by embedding more than 2,200 total trading cards with shimmering circular discs of real 14-karat gold. Quite literally, there is gold in that thar Hillis. Tim Tebow? A golden boy for sure. There will be no more than 10 copies of any one gold card, and most of them will also include the depicted player’s autograph.

It’s a strike-it-rich, collecting-turned-gold-digging proposition that should be well received by NFL fans across the country starting later this week. Until then, enjoy these gilded first glimpses at football cards that must be seen to be believed . . .