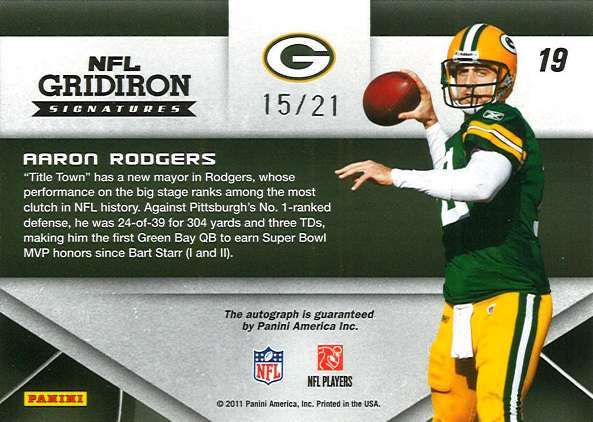 Three hundred characters, including spaces. That’s not a lot of room to sum up the entire career – much less even one meaningful highlight from the career -- of a professional athlete. In fact, by the time you get to the good part, you’re out of room. So how does the Panini America editorial team do it?

Three hundred characters, including spaces. That’s not a lot of room to sum up the entire career – much less even one meaningful highlight from the career — of a professional athlete. In fact, by the time you get to the good part, you’re out of room. So how does the Panini America editorial team do it?

For the record, the above passage includes 304 characters with spaces. So I failed, by four measly characters, my assignment this morning – which makes what the Panini America Editorial Department does on a daily basis even more impressive. What follows is a unique perspective on the art – and it is an art – of writing cardback copy, compliments of the best copywriters in the industry.

Our blogmeister extraordinaire, Tracy Hackler, asked for a post from the Editorial Department entitled “Cardbacks for Dummies,” which more or less explains what it is that we do. So, three of us jotted down a few words lacking wisdom for the reading audience:

Now try doing so 67 times. Yes, 67. That’s how many blocks of copy we’ve written for the No. 4 overall pick this past March. That doesn’t include combo, trio and quad cards, either. Those are always fun. Write about four players using that same character count. Find yourself running out of real estate before the first verb.

Still, there are few jobs cooler than sitting around writing and talking about sports all day. It’s also a chance to educate, especially the younger collectors. Who among us didn’t learn the bulk of our baseball knowledge as kids from the backs of cards? Statistics, too. Sure, this was before the Internet, but hopefully the experience is the same for this generation of youth.

Here are a few of my favorite cards from our staff the last few years:

Bill Sharman — There was nothing soft about Sharman. He is one of three men enshrined in the Basketball Hall of Fame as a player (1976) and a coach (2004), with Lenny Wilkens and John Wooden. A four-time champion with the Celtics as a player, he led the NBA in free-throw shooting seven times, including five straight years.

Blake Griffin — Treating rims around the league like his personal jungle gyms, Griffin hung, swung and flung his way to NBA Rookie of the Year honors in 2010-11. While Orlando’s Dwight Howard (227) edged the Clippers phenom (214) for most regular-season jams, the rookie was crowned top dog at the Slam Dunk Contest.

Michael Vick — Jack be nimble, Jack be quick, but Jack’s not quicker than Michael Vick. In 2006, Vick rushed for 1,039 yards, a single-season NFL record for quarterbacks. And in 2010, he joined Kordell Stewart (1997) as the only quarterbacks ever to throw for more than 20 touchdowns and rush for at least nine scores in the same season.

Writing is by far the best part of the job. Proofreading is probably the worst. Editing falls somewhere in between. Combing through the copy on hundreds of card backs at a time, checking for accuracy, spelling, grammar, punctuation, style or any other mistakes that might get us fired is challenging work. It can also be mind-numbing. To relieve some of the boredom of editing, we keep track of the “helpful” suggestions made by Spellcheck for names it doesn’t recognize.

One of the most challenging parts of writing card backs for Panini America is staying positive. Coming into the industry with a newspaper journalism background and a minor in political science in college, being critical has always been part of my writing voice.

Even if a player has struggled an entire season, it’s important to remember as a writer that this player still has leagues of fans out there. When they see their player’s card, turn it over and read the copy on the back, they don’t want to be reminded of that player’s bad games. The good news is, there’s always something positive to write about. Sometimes it takes more than a little extra effort to find it, but it’s there. Our job is to find it and turn it into a mini work of sports literary art.

One of the best examples, just from today, is Philip Rivers. Today I wrote his 2011 National Treasures Football common card. Rivers has a huge fan base. He’s a classy player and a great competitor. Last year he was an easy write.

Here’s a quarterback who was missing his top two targets in 2009 for most of the season — Vincent Jackson was in a holdout (we can’t write about that either) and Antonio Gates was out most of the season with an injury. Rivers was still a stud. He had a ton of great performances, overcame obstacles and was still prolific (the Chargers had seven different receivers with 100-yard games: Antonio Gates, Vincent Jackson, Patrick Crayton, Seyi Ajirontutu, Legedu Naanee and Malcom Floyd). He was an MVP candidate in my book. I must have written a dozen of his cards and they were all seemingly effortless.

Here’s my thought process: We want to be as recent as possible, so let’s look over his 2011 game log.

The Chargers started 4-1, and Rivers was good, but not great. Six touchdowns and seven interceptions in five games. Consider heading into 2011 that Rivers was among the all-time leaders in quarterback rating. So let’s move along to after the 4-1 start. The Chargers lost six straight and Rivers throws 10 touchdowns and 10 interceptions. Ouch. Not many positives in there – especially on the level of Rivers.

The challenge at hand is: How do I write a positive card about a struggling superstar in the middle of a six-game losing streak who has already caught enough negative press from his hometown media?

I chose to go with his Week 9 game against the Packers. Sure he threw three interceptions, which had a big impact on the outcome of the game. But he did throw for 385 yards and four touchdowns against the world champions. It’s not his best work, but it’s what we have.

I felt relatively good about my selection, but it just goes to show it’s not always easy. Also keep in mind, we’ll be writing a lot more in the coming weeks, so here’s one writer that’s rooting for Rivers to turn it around.

13 Replies to “The Other Side of Cards: Behind the Scenes with Panini America’s Editorial Department”