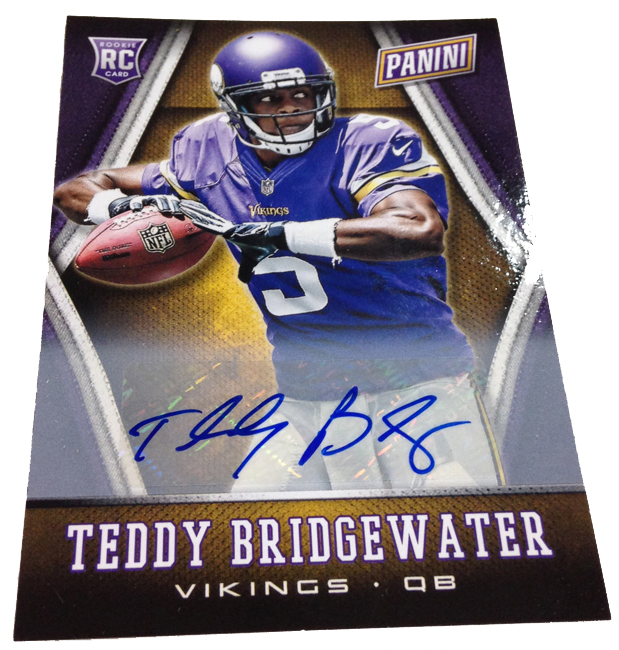 At 4 p.m. today, Cleveland’s sprawling, Ferris-wheel-enhanced I-X Center will open its doors for a special Sneak Peek opening of the 35th National Sports Collectors Convention. At approximately 4:02 p.m., the Panini America booth will start to become crowded for the first time. Sometime late Sunday afternoon, the crowds will finally start to subside.

Indeed, activity at the Panini America booth for every National is an open-to-close affair featuring Box Wars, Group Breaks, collectors earning their way to the annual Panini VIP Party and, of course, the vaunted Panini America Wrapper Redemption program. Yesterday, we brought you up close and personal with some of the unique memorabilia cards invading the program this year. Today, we’re focusing on some of the autograph possibilities.

This year, Panini America is delivering some bona fide gems, including the first autographs on the market of the top 2014-15 NBA rookie class, key early autographs of top 2014 NFL rookies, signatures from some bona legends of the game (Jerry Rice, Don Mattingly, Dominique Wilkins and more), autographed versions of the memorabilia cards profiled yesterday — and rare Cracked Ice and Lava Flow versions of all of them.

The gallery below details just some of the highlights. Check it out and stay tuned to The Knight’s Lance all week long for complete coverage of the 2014 National Sports Collectors Convention.

For additional details of everything we have going on this week, click the links below: