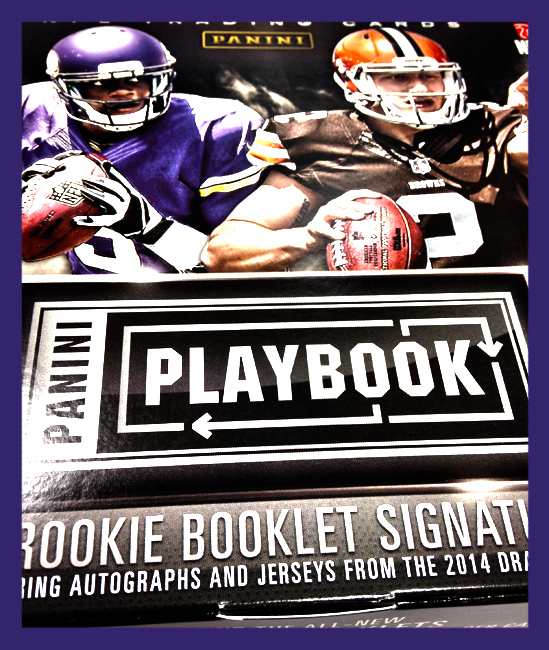 Truth be told, I don’t care what handle he uses as long as he continues providing the kind of captivating, from-the-production-line images that he did for 2014 Playbook Football. One of the industry’s most unique products (and, in the interest of full disclosure, one of my personal favorites) has undergone a major reconfiguration for 2014, with each two-card pack delivering one booklet card and one autograph card.

2014 Playbook Football is bolstered by some of the coolest single cards you’ll see all season, including the distinctive Rookie Booklets and Rookie Booklet Signatures, the return of the impeccable Down & Dirty Booklets, the addition of the simply sublime Game of Inches and Armory Booklets and so much more.

In the Quality Control Gallery that follows, we bring you up close and personal with many of the hits that surfaced last week during the packout process. But before we get to the gallery, we offer a quick recap of some of the buzz-generating Tweets that originated from the Panini America count throughout the day . . .

The Game of Inches booklets need to be seen in person to truly appreciate them. Wow. #PlaybookIsComing pic.twitter.com/V5fKFvkXL4

Here's a look at more acetate autos. This time with memorabilia and featuring the veterans. #PlaybookIsComing pic.twitter.com/Se66HAJcEu

2014 Playbook Football arrives in hobby shops across North America on Friday. We’ll have more coverage of the product right here on The Knight’s Lance later this week. Until then, though, enjoy the must-see Quality Control gallery . . .