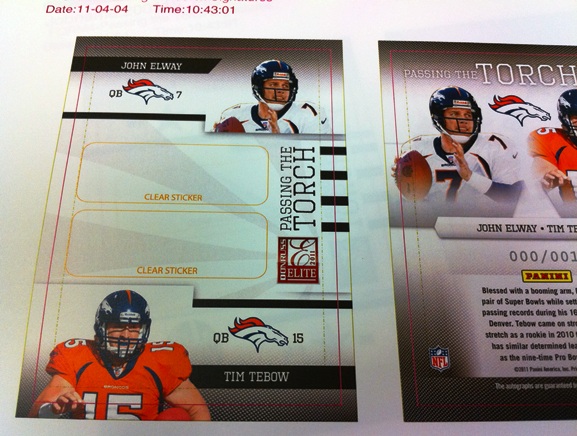 You want to know how the Panini America football team is passing the time these days? Simply take a look at the images that follow.

You want to know how the Panini America football team is passing the time these days? Simply take a look at the images that follow.

Indeed, there’s no rest for the weary in the trading card industry. Just five weeks removed from launching its final football release of the 2010 season, the Panini America gridiron juggernaut is currently working on no less than three different products for the upcoming 2011 season. And all three were on splendid display today at the vaunted Routing Table.

Below you’ll feast on an appetizing array of pre-production paperwork for 2011 Score, 2011 Prestige and 2011 Donruss Elite, highlighted by the first glimpses available anywhere of . . .

Now as always, this caveat stands: Anything that appears on the Routing Table is typically in an extremely early stage in the production process and will often include “For Position Only” player and team names, “dummy” card-back copy and first-wave photos that will change between now and release time. But there’s still no better place in the industry to get early glances at tomorrow’s most collected cards.

Oh, and Houston Texans fans, don’t get your hopes up. That team name you see on all the Prestige RC designs is strictly “FPO” and by no means an indication of where that particular player will end up on Draft Day.