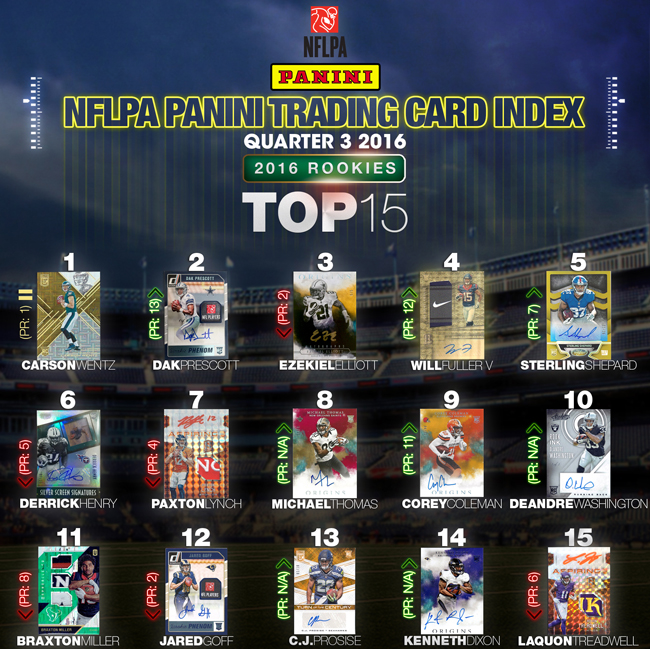 Panini America, the exclusive trading card manufacturer of the NFL and NFL Players Association (NFLPA), in conjunction with NFL Players Inc., the licensing and marketing arm of the NFLPA, today unveiled the third edition of the NFLPA Trading Card Index, a quarterly report ranking the top-performing football players in the trading card industry.

Panini America, the exclusive trading card manufacturer of the NFL and NFL Players Association (NFLPA), in conjunction with NFL Players Inc., the licensing and marketing arm of the NFLPA, today unveiled the third edition of the NFLPA Trading Card Index, a quarterly report ranking the top-performing football players in the trading card industry.
Once a quarter, the NFLPA Panini Trading Card Index ranks the top 15 rookies and top 15 veterans based on several key factors, including secondary-market transactions, overall trading volume and collectability based on on-field performance and expectations (e.g., rookie hype and collector speculation). The third NFLPA Panini Trading Card Index, listed in its entirety below, includes updated rankings for both rookies and veterans based on early season performances and fan and collector reaction. The newest Index rankings are based on secondary-market transactions and trading volume that took place during the third quarter of 2016.

Philadelphia Eagles rookie quarterback Carson Wentz strengthened his stranglehold on the No. 1 rookie spot following a 3-0, turnover-free start to his career. Wentz is arguably the most sought after player in the trading card arena but is receiving intense competition from the dynamic Dallas Cowboys duo of Dak Prescott (who vaulted a whopping 11 spots since Q2 to No. 2 on the rookie list) and Ezekiel Elliott (who has been a top-three fixture in each of the first three Indexes). Los Angeles Rams quarterback Jared Goff fell 10 spots to No. 12 on a rookie list that features first-time appearances from New Orleans Saints receiver Michael Thomas, and running backs DeAndre Washington (Oakland Raiders), Kenneth Dixon (Baltimore Ravens) and C.J. Prosise (Seattle Seahawks).
“Honestly, this is pretty cool,” said Wentz. “To be among so many talented and popular rookies this early in the season, is really humbling. I’m just thankful to all the fans, both in Philadelphia and beyond, who helped put me in this position so early in my career.”
New England Patriots quarterback Tom Brady tops the veteran Index for the second consecutive time, followed by Green Bay Packers quarterback Aaron Rodgers, who moved up nine spots in the last quarter. The veteran top five is rounded out by Carolina Panthers quarterback Cam Newton (up six spots), Pittsburgh Steelers receiver Antonio Brown (making his Index debut) and Oakland Raiders quarterback Derek Carr (up five spots). Aside from Brown, other new veteran additions this quarter include Denver Broncos linebacker Von Miller, Steelers quarterback Ben Roethlisberger, and star receivers Julio Jones (Atlanta Falcons), DeAndre Hopkins (Houston Texans) and Doug Baldwin (Seattle Seahawks).
“It’s great to be among some of the best players in our sport,” said Brown. “Guys like Tom, Aaron, and Cam are amazing, so to be the only non-quarterback in the top five is truly an honor. Everyone knows that the Steelers have great fans, but this shows how much you’re appreciated even beyond your own fan base.”
“In terms of the football card category, this has been one of the most spectacular starts to a season in quite some time,” said Jason Howarth, Panini America’s Vice President of Marketing. “Wentz, Prescott and Elliott have been nothing short of sensational and a country full of football fans and collectors has responded with feverish buying habits on those players’ best Rookie Cards. That trend shows no signs of slowing down. On the veteran side this quarter, there aren’t many surprises. The biggest stars have continued to shine brightly. It’s nice to see new players make the list with the football season now underway.”
Notable third-quarter sales driving rookie rankings include a 1/1 Gold version of Wentz’s 2016 Donruss Elite Football Rookie Card that sold for $1,150, a 1/1 autograph memorabilia version of Prescott’s 2016 Donruss Football card that sold for $1,500 and a 2016 Origins Football booklet card featuring Elliott’s autograph and memorabilia that sold for $1,500. On the veteran side, a Brady 2000 Contenders Football autographed Rookie Card sold for $9,988 and a Newton 2011 National Treasures Football Rookie Card sold for $5,026.99.
The 2016 NFLPA Panini Trading Card Index: Rookies (3Q); previous ranking in parentheses