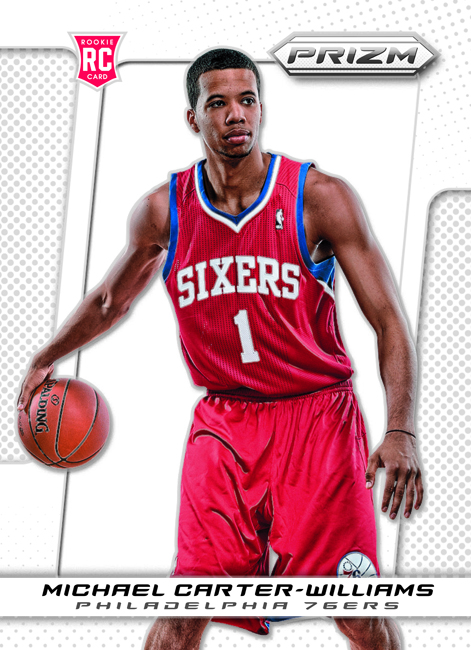 It's no secret that Philadelphia 76ers red-hot rookie Michael Carter-Williams has spent the first month of his career on a historical tear, helping drive sales of Panini America's officially licensed NBA trading cards with one impressive feat after another, including his history-making triple-double duel Tuesday night with fellow rookie Victor Oladipo.

It’s no secret that Philadelphia 76ers red-hot rookie Michael Carter-Williams has spent the first month of his career on a historical tear, helping drive sales of Panini America’s officially licensed NBA trading cards with one impressive feat after another, including his history-making triple-double duel Tuesday night with fellow rookie Victor Oladipo.

But these days, even Carter-Williams’ impressive actions off the court are the subject of mainstream headlines, like the story from earlier this week about the steps Carter-Williams is taking — with the strong support of his family — to ensure financial stability. The Philadelphia Inquirer’s Keith Pompey wrote a captivating profile on the making of Carter-Williams, a worth-the-read piece that sheds considerable insight into how he blossomed into one of the most promising young talents in the league.

A few sentences in particular from Pompey’s piece, near the bottom of the story, caught our attention: “His rookie contract guarantees him $4.5 million over his first two seasons. He could make a total of $10 million if the Sixers pick up the final two seasons of his contract. But his salary is deposited into a trust he can’t touch for three years. Carter-Williams is living off endorsement deals with Nike and Panini trading cards.”

To be sure, that last sentence was by no means breaking news for Ivory Tabb, Panini America’s NBA Acquisitions Manager. Tabb has worked closely with Carter-Williams and his family since before he was drafted and has seen firsthand the uniqueness of this situation.

“From the very beginning, you could see this was going to be a different case,” Tabb recalls. “All of his family was at the Draft for the entire process. I gave him his first set of autographs there and a week later, he had completed them and turned them in. His mom was very hands-on, making sure she understood the process and how it works.”

By the time the 2013 NBA Rookie Photo Shoot arrived in early August, Carter-Williams had signed almost his entire rookie season’s worth of Panini America autographs.

“I don’t feel like we will ever have any redemption problems with Michael because he understands that signing for Panini America is a job, just like playing basketball is. It also helps that he knows if he wants spending money, it comes from us.”

Speaking of spending money, a lot of collectors are using theirs these days on Carter-Williams — and for good reason. Through 15 games, he leads all rookies in scoring (17.7 ppg), assists (7.3 apg), rebounds (5.8 rpg) and steals (3.1 spg) per game. From his very first game (when the first-round pick from Syracuse narrowly missed a quadruple-double in the Sixers’ 114-110 victory over the defending NBA champion Miami Heat) to his most recent (the triple-double battle with Oladipo), Carter-Williams has had fans and collectors clamoring for his best Panini America trading cards.

In the gallery that follows, we track the rookie phenom’s top-selling cards so far, a staggering assortment of gems from 2013-14 NBA Hoops, 2013-14 Prestige, 2013-14 Totally Certified and 2013-14 Panini Black Friday. Below each image, we include the highest price paid to date for that particular card.