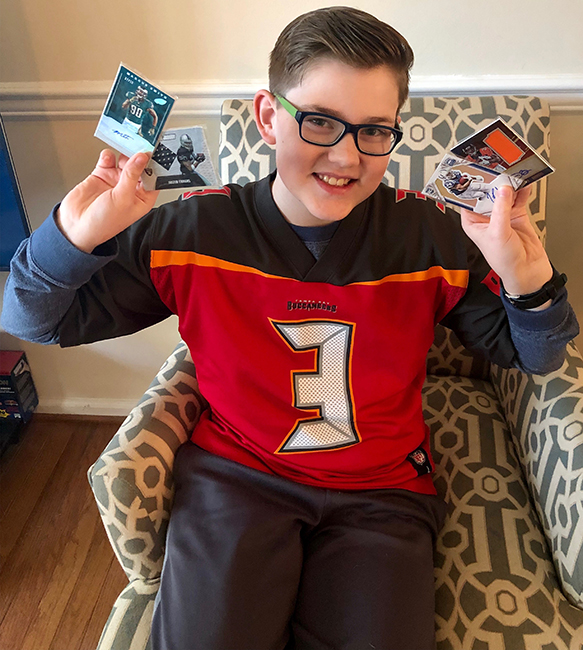 It's probably for the best that 12-year-old collector Corbin Boehm was out of school on Monday for the Martin Luther King Jr. holiday. The Terra Centre Elementary School sixth-grader from Burke, Va., likely wouldn't have been much good in the classroom yesterday afternoon anyway. Not after receiving a special phone call from Super Bowl-winning quarterback Trent Dilfer.

It’s probably for the best that 12-year-old collector Corbin Boehm was out of school on Monday for the Martin Luther King Jr. holiday. The Terra Centre Elementary School sixth-grader from Burke, Va., likely wouldn’t have been much good in the classroom yesterday afternoon anyway. Not after receiving a special phone call from Super Bowl-winning quarterback Trent Dilfer.

For Boehm, the call was as unexpected as it was transformational. In fact, the kid was sure Dilfer had dialed the wrong number at first. Dilfer, of course, doesn’t dial wrong numbers. And he only picks up the phone to call a young collector once a year — and it’s always good news. Indeed, as the grand prize winner in Panini America’s season-long Super Bowl Kid Reporter contest, Boehm is going to Super Bowl LIII. Alongside Dilfer, Boehm will work the arena on Super Bowl Opening Night like a veteran sports reporter, asking questions of the AFC Champion New England Patriots and NFC Champion Los Angeles Rams. He’ll bask in the Super Bowl glow. He’ll make memories that will last a lifetime. Heck, he may even make a few headlines himself.

Boehm, a diehard Tampa Bay Buccaneers fan, has grown up watching football — and collecting cards — with his father, James. In fact, it’s those two things he misses more than just about anything now with his dad deployed in Afghanistan with the United States Air Force. But now Corbin will have one great story to share with his father when he returns home from his military duty. He’ll have some epic tales to tell his friends at school, too.

“Oh, man. That’s something I haven’t even thought about yet,” Corbin said. “Honestly, they may be a little jealous.”

Who wouldn’t be? Corbin’s entries, acquired from packs of 2018 Panini America NFL trading cards he purchased at Target, were among the more than 63,000 entries in this year’s Panini Super Bowl Kid Reporter contest. As one of 10 finalists selected at random, Corbin had to submit a video showcasing his interviewing chops. It was in that video that the good-looking kid with the perfect hair stole the hearts of judges, including Dilfer himself, to become this year’s winner.

For Corbin, who says he was “kind of committed to being a football fan” by his dad when he was just a toddler, winning the Panini Super Bowl Kid Reporter contest is something he couldn’t have fathomed when he transitioned from collecting baseball cards to collecting football cards about two years ago.

“I’m hyped about this,” he said. “I’m excited and I’m blessed to have this opportunity.”

Although he’ll be the one asking the important questions on Super Bowl Opening Night, he’s not above answering a few, either.

Be sure to stay tuned to The Panini America social media channels all next week as we document Corbin’s Super Bowl week experience.