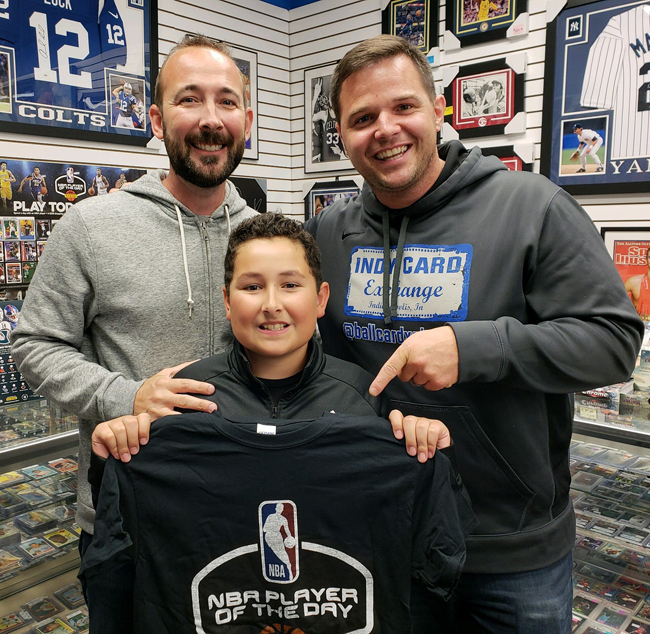 Close to 100,000 card collectors at 400 hobby shops nationwide participated in the third edition of the Panini NBA Player of the Day promotion last spring. Although those folks won more than 100,000 prizes, just one collector, 12-year-old Aiden Jones of Fishers, Ind., parlayed his lucky pack of Panini NBA trading cards into the chance to spend a day with an NBA player.

Close to 100,000 card collectors at 400 hobby shops nationwide participated in the third edition of the Panini NBA Player of the Day promotion last spring. Although those folks won more than 100,000 prizes, just one collector, 12-year-old Aiden Jones of Fishers, Ind., parlayed his lucky pack of Panini NBA trading cards into the chance to spend a day with an NBA player.

On November 4, Jones and his family will host a private party at his home for friends and family with Aaron Holiday, the Pacers’ top pick in the 2018 NBA Draft. During the party, Holiday will talk basketball, sign autographs, pose for photos, open packs of Panini America NBA cards and maybe even shoot some hoops. After the party, Jones and Holiday will take a limousine to visit Jones’ favorite hobby shop, Indianapolis’ Indy Card Exchange to sign free autographs for 150 of the shop’s loyal customers. Each customer will receive an exclusive Panini NBA Player of the Day Holiday card created especially for the event. Jones will also receive a signed 1/1 version of the card, a $250 shopping spree at the store and a special goodie bag.

“Many people collect Panini America NBA trading cards because it brings them closer to their favorite players. That will surely become a reality for Aiden and his friends and family when Aaron Holiday is sitting in his living room,” said Jason Howarth, Panini America Vice President of Marketing. “We want to thank Andy and Jake of Indy Card Exchange and the 400 other hobby shops who continue to enthusiastically support the Panini NBA Player of the Day promotion.”

Jones has been collecting basketball and baseball cards for the past three years and loves interacting with the owners and customers of Indy Card Exchange, and he tries to make it to the shop every week. He earns money by selling cards on eBay, at a local monthly card show and doing jobs around the house to help his parents. He plans to work at Indy Card Exchange until he can open his own card shop one day, which is his dream. Jones also enjoys visiting other card shops when the family travels out of state to compare prices, find deals and to look at different collections. Last summer, while in California, Jones got to be in his first live YouTube video at Hall of Fame Baseball Cards in Arcadia, Calif., while visiting family in the area. That was one of the highlights of his trip.

Despite living in the heartland and home of basketball, Jones’ favorite NBA players are Jayson Tatum, Terry Rozier and Kyrie Irving of the Boston Celtics. His favorite Panini America products this year were Donruss Optic, Select and Spectra, and his best pulls were a Lonzo Ball autograph numbered to 75, a Malik Monk Black Velocity and a Donruss Optic Markelle Fultz autograph.

The centerpiece of the Panini NBA Player of the Day promotion is a poster featuring Panini America card images of one player from each of the 30 NBA teams. Each day, a different player on the poster is designated as the “Panini NBA Player of the Day.” Every time a collector purchases a pack of officially licensed Panini America NBA trading cards and pulls the player of the day, they win a prize. Each week, stores conduct a drawing from the daily winners to award a weekly prize. Then, at the end of the month-long promotion, each store awards a grand prize from that’s entered into the national sweepstakes. Jones was selected from the 400 shop winners.

Stay tuned to The Knight’s Lance, the Panini America social media channels and the @PaniniPOD Twitter account for complete coverage of Holiday’s big day. For more information about the Panini Player of the Day promotion, visit www.PaniniPOD.com. 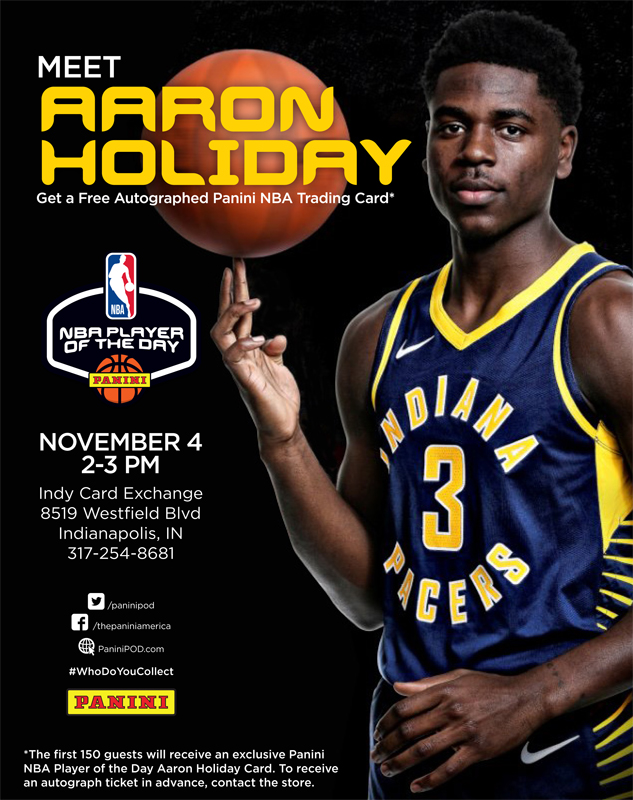