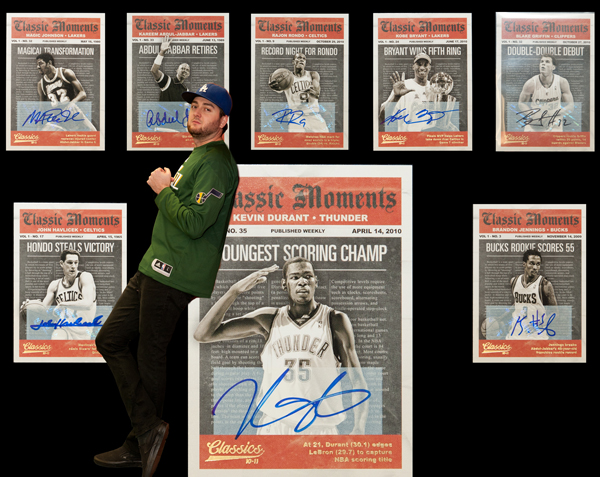 Editor's Note: Equal parts entertaining and inspirational, the following story comes to us directly from the mind and keyboard of dedicated SoCal collector Adam Scoggan, who details his dogged pursuit and completion of the 2010-11 Classics Basketball Classic Moments Autograph insert. Enjoy.

Editor’s Note: Equal parts entertaining and inspirational, the following story comes to us directly from the mind and keyboard of dedicated SoCal collector Adam Scoggan, who details his dogged pursuit and completion of the 2010-11 Classics Basketball Classic Moments Autographs insert. Enjoy.

I always thought I knew what went on in the card game due to my extensive collecting as a kid. Boy, was I wrong. It’s crazy how much the hobby has changed. My current collection is definitely a result of my addiction to basketball, in particular the Utah Jazz.

Growing up in Southern California was not the best place to be a fan of John Stockton and Karl Malone, but I didn’t care. I loved their passion, hard work and especially their teamwork. Ever since I’ve been able to afford it (10 years), I’ve been to every Jazz vs. Lakers and Jazz vs. Clippers game at the Staples Center.

The new regime of young talent on the Jazz lit back up my desire to collect cards. My quest started at a local card shop where I bought one pack of Panini America’s 2010-11 Threads Basketball. I thought I hit the freaking jackpot when I pulled a Rip Hamilton insert numbered to 299. 🙂 The owner was a little confused by my joy from such a simple card. After that embarrassing moment, I was dedicated to doing my research and putting together a most diverse, yet personal, collection.

A buddy of mine at work was opening packs of 2010-11 Classics Basketball and pulled a Blake Griffin Classic Moments insert; the card signified Blake’s amazing accomplishment of his double-double debut. I absolutely fell in love with the design of the card and how it noted Blake’s accomplishment. After seeing the card, I reached for the checklist and saw there was an autographed parallel version and a plethora of amazing players in the set. I told my buddy that I was going to complete this set. His next words were what inspired me the most: “There’s no way in hell you will ever complete that set,” he said. “The Magic Johnson is only numbered to five and half of them are numbered to either 25 or 10.”

The first month was easy. I believe within three boxes of busting, I pulled the Griffin auto out of 25. Another four or five boxes later — Boom! — the Kevin Durant redemption out of 25. I was rolling! I set up an auto search on an online auction site, where I got the Kobe Bryant out of 99 from a seller in China. Months passed and while opening another box . . . Boom! . . . “Hello, Rondo out of 25.” About one month later, the John Havlicek out of 10 popped up online from a seller in Canada. Of course, I won that bid and it was on its way to where it belongs.

Believe it or not, the Magic Johnson out of five was the next card that I got. When I obtained this card, I knew the set was a possibility. The Magic was online and ended right in the middle of a concert that I was attending. To be honest, I was on my phone watching the auction more than the concert. Again, I was the top bidder and it was on its way to me.

The Kareem Abdul-Jabbar auto out of 10 is by far my favorite story because of the way a community of collectors would come through for one another. I was consistently posting what cards I still needed on the Blowout Cards forum when, one day, I got a message from a collector in Australia, my now buddy Drob50. He told me that he pulled the Abdul-Jabbar a few months earlier but had since sold it. He told me that he still might have the person’s info he sold it to and he would contact him for me. Sure enough, he found him and after weeks of communication, he worked out a deal between the two of us and shipped the card from Australia to SoCal on his dime. Now that’s a collector that should be noted!

So the Brandon Jennings auto out of 10 was the last card I needed. Man, was I feeling good. That feeling started to fade away after six months passed with still no Jennings. Box after box, search after search and still I came up empty. I even hit up the Panini America Customer Service team to get more info on the card. On August 31, 2012, the Jennings showed up online and I couldn’t hit the “Buy It Now” button faster! More than one year later, the set was complete. The irony was that three of the cards came from three different continents but the hardest card to find was only 20 miles from my house.

My favorite card out of the set is easily the Durant. I think a card holds more personal value to you when you personally pull it out of a pack. I also respect Durant’s game immensely and love this salute to him. With that being said, the entire set was put together perfectly. I’ve shared this set with fellow collectors and I have not received one negative comment.

Along my journey of completing this set, I’ve hit some monsters out of other Panini America products. But these eight that follow are some of my favorites . . .